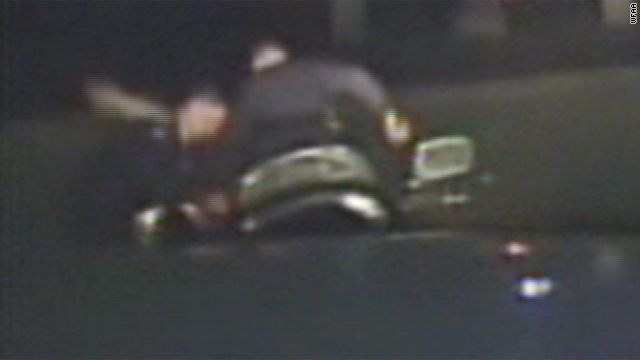 Officers Paul Bauer and Kevin Randolph were charged with aggravated assault with a deadly weapon by a public servant, a charge that carries a five-year minimum prison term, in the September 5 beating of motorcyclist Andrew Collins. A third officer, Henry Duetsch, was charged with third-degree felony of tampering with physical evidence, said Jamille Bradfield, a spokeswoman for the Dallas County district attorney's office.

There was no immediate response to the charges from the three defendants.

Prosecutors say Bauer and Randolph spotted Collins sitting on his motorcycle on a sidewalk the night of September 5. He drove off when the officers shined a spotlight on him, and they began pursuing him. An internal investigation found that Bauer and Randolph disregarded an order to stop the chase, with one of the officers saying, "Keep us going. I'm going to kick the s--- out of him."

Collins eventually stopped, and when the officers spotted him, Bauer struck the bike with his patrol car. Randolph beat Collins with his baton after Collins dropped to all fours, and Bauer began hitting and kicking him, police said. And Duetsch, who arrived on the scene after Collins had stopped, turned another cruiser's dashboard camera away from the scene when he arrived.

Three other officers were put on restricted duty after the beating. They were seen on the second video also having contact with Collins, but they are not clearly seen because Duetsch had turned the camera away from the beating, Dallas Police Chief David Brown said earlier this month.

In a statement issued after the indictments, Brown said the charges are "another step in the process of bringing this incident to a conclusion."

"As chief of police, I will ensure that every citizen of this city is treated with a deserved measure of respect by our officers," he said.

Collins suffered bruises in the incident, developed blood clots and complained of pain. He initially was charged with three traffic warrants, evading arrest, resisting arrest, and possession of marijuana after his arrest. After seeing the video, police dropped the resisting arrest charge.