Damien Echols talked from death row about his appeal in the West Memphis 3 case.
STORY HIGHLIGHTS

Grady, Arkansas (CNN) -- Some things about Damien Echols remain unchanged since he was sentenced to death in 1994 at the age of 19 after being convicted of murdering three 8-year-old boys.

At 35, his favorite holiday is still Halloween. To celebrate, friends say, he sends them hand-made jack-o'-lantern cards. He longs for contact with the outside world.

"I miss the things that most people take for granted, things people don't want, like rain," Echols told CNN in a face-to-face interview airing on tonight's "AC360°."

"To go out and touch it and get wet, or to feel snow. I loved snow my entire life, and I haven't had that in almost 20 years now."

From the Varner Unit of the Arkansas prison system, Echols maintains his innocence 16 years after he and two other teens were convicted of murdering three Cub Scouts -- Michael Moore, Christopher Byers and Steven Branch. On May 6, 1993, police in the rural community of West Memphis, Arkansas, found their bodies bruised and mutilated, their arms and legs hogtied with their own shoelaces.

Echols, along with 16-year-old Jason Baldwin and 17-year-old Jessie Misskelley, were found guilty a year later. Echols received a death sentence, while Baldwin and Misskelley were sentenced to life in prison. The three teens became known as the West Memphis 3.

Echols is asking the Arkansas Supreme Court on Thursday to grant him a new trial. His lawyers want to present DNA evidence not available at the time of the trial, as well as testimony that supports arguments that Echols and the two others did not commit the crime.

Meanwhile, no execution date is set for Echols.

"We are asking the Arkansas Supreme Court to right a terrible wrong, overturn their convictions and grant Damien as well as Jason Baldwin and Jessie Misskelley a new trial," said Dennis Riordan, the lead attorney on the case.

Born in West Memphis, Echols grew up in poverty. His family shuffled between trailer parks and apartment buildings, moving around the country frequently. They survived on food stamps, what Echols often called "government cheese."

In his 2005 autobiography "Almost Home," Echols documents one winter when his family lived without heat, huddling around a wood-burning stove to stay warm.

"The worst part wasn't the poverty, the heat, the cold, or even the humiliation of living in such circumstances; it was the absolute and utter loneliness," Echols wrote in his book.

No matter where they went, Echols never quite fit in.

The family settled back in Marion, Arkansas, a small town next to West Memphis. Echols dropped out of high school, where he says he was an outcast. He kept his dark hair long, wore black clothes and listened to heavy metal music. His best friend, Jason Baldwin, was later tried with him and convicted of murdering the three children. Echols believes that he, Misskelley and Baldwin were targeted by authorities because they were misfits.

"I didn't fit into the town where I lived," Echols told CNN in his prison interview. "I had never even heard of the word 'goth' up until a few years ago."

Echols says police questioned him a day after the bodies of the second-graders were found in the woods, near where they used to hunt turtles. A month later, the teens were arrested.

Prosecutors successfully argued the defendants were involved in a satanic cult. They said that punctures and cuts on the boys' bodies indicated a ritual sacrifice.

In addition, prosecutors secured a confession from Misskelley, although his defense attorneys argued that he had a learning disability and an IQ of 70. They also claimed that it was not only riddled with inconsistencies but was coerced. 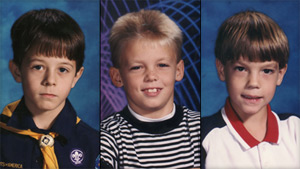 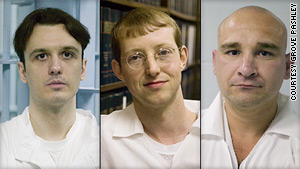 Damien Echols, Jason Baldwin and Jessie Misskelley were convicted and are serving their sentences.

Neither his parents nor his attorney was present when he was questioned. His confession came during the last hour of a 12-hour police interrogation. A tape of the confession was play in court his trial.

The three teens were convicted of the boys' murders in early 1994. Misskelley and Baldwin were given life sentences. Echols, who was an adult at the time of the murder, was sent to death row.

Echols is no longer the naive teenager who entered prison in 1994. His hair is cropped short, and he has grown into a serious and thoughtful 35-year-old man.

His skin is ghostly pale. He rarely sees the sun in prison because he is in solitary confinement, and he appears to be thinner than he did during the original trial. He says the only sounds he hears are the screams of an inmate with psychiatric problems.

While finding joy on death row is difficult, Echols smiles when he talks about his wife, Lorri Davis, a 47-year-old landscape architect in Little Rock, Arkansas. Davis visits him weekly. He calls her when he can. To stay connected, they do little things like drinking water at the same time each day.

Davis wrote Echols in prison, and they married in 1999.

"You wanted to root for him," Davis said about her husband. "He didn't have a prayer down there with all those people who thought he was guilty."

In prison, Echols spends his days reading, meditating and practicing Reiki, the ancient art of healing. He reads The New Yorker and books on history and theology, those close to him say. Besides his book, he has written song lyrics he sends to his friend and supporter, Eddie Vedder of Pearl Jam.

Meditation has helped Echols work through his anger about being accused of a crime he says he did not commit, his wife said.

The West Memphis 3 have gained advocates, including unexpected support from some of the parents of the victims. Last year, Pamela Hobbs, mother of victim Steven Branch, told CNN that she was once convinced of their guilt. Then she began to consider the DNA evidence. She now says she believes the prosecution's case was flawed.

Capi Peck formed Arkansas Take Action, a Little Rock-based group trying to raise awareness about the West Memphis 3. In the past few weeks, the group has brought in celebrities such as Vedder and actor Johnny Depp to a public rally.

"He's so positive and focused," Peck said of Echols, who is anxious for the court to hear arguments Thursday. "He's just ready to get this done."

Despite mounting support in the community and across the country, Echols' freedom rests on the courts.

His attorneys are trying to convince the Arkansas Supreme Court that new evidence not available during the trial exonerates Echols. DNA testing indicated that a hair found on the shoelace used to tie up one of the victims is consistent with a hair from Terry Hobbs, the stepfather of victim Steven Branch.

Police have never considered Hobbs a suspect and he maintains that he had nothing to do with the murders. Hobbs has said the boys often played together at his family's home.

"I want someone to put a stop to this," Hobbs told CNN in December. "I'm tired of this stuff. No one understands or cares what this does to us as parents over and over again." Terry and Pamela Hobbs divorced in 2004.

The state argues that under Arkansas law, Echols' defense team did not have the right to test the DNA because they did not first prove he was innocent. West Memphis police and the lead prosecutors, who are both now judges, have long considered the case closed.

About the DNA, Oakes pointed out that no one has ever determined whether the boys were actually tied up with their own shoe laces or whether Steven Branch's shoe laces may have been used on Christopher Branch, which is where Hobbs' DNA was found.

"We are committed to fairness and justice -- not just for the three inmates but also for the three little boys who didn't live to see middle school," Arkansas Attorney General Dustin McDaniel told CNN in a written statement.

In a deposition last year, Hobbs said he never saw his stepson and the other boys on the day they disappeared. However, defense attorneys say that three new witnesses have stepped forward who will testify that they saw Hobbs with the children that evening.

Hobbs, the former prosecutors and other skeptics have questioned why it took so long for the new witnesses to come forward. Defense lawyers say the new eyewitnesses were not aware that Hobbs claimed not to have seen the boys on the night they were killed.

But Echols is confident his lawyers will be able to convince the court to grant him a new trial.

"I believe there has to be a good reason for this," he said. "I believe something good will come out of it."