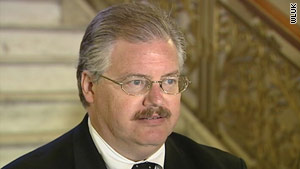 (CNN) -- Embattled Calumet County, Wisconsin, District Attorney Ken Kratz has resigned amid a texting scandal, according to the office of Gov. Jim Doyle.

Two weeks ago, at a news conference, Kratz apologized for sending personal texts to a domestic abuse victim while prosecuting her former boyfriend. At the time, he said he wouldn't step down from office.

Wisconsin Department of Justice officials said some of Kratz's texts "cross the line and can be construed as sexual harassment."

E-mails from November 2009 between Kratz and the Wisconsin Department of Justice show Kratz denied wrongdoing for weeks before finally saying, "My behavior was inappropriate."

In recent months, several local and state domestic violence organizations have called on Kratz to resign as district attorney.

CNN's Chuck Johnston and Antoinette Campbell contributed to this report.