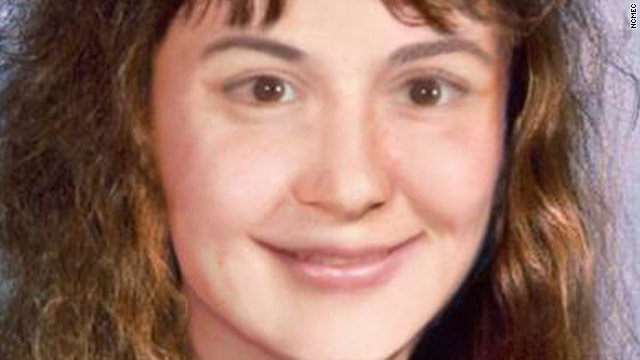 Kimberly Norwood, who vanished at age 12, would be nearly 34 now and might look like this age-enhanced photo.
STORY HIGHLIGHTS

(CNN) -- Of all the experiences they shared in their 12 years together, Janice Norwood still recalls a special moment when her daughter Kimberly confided in her while they were going into town one day.

"She was having a little problem with some math and she said, 'I just can't get fractions,''' Norwood recalled. Kimberly, a good student, would enter junior high school during the next school year.

Kimberly never made it to her junior high school. She disappeared on May 20, 1989, a Saturday. She had spent the night at a friend's house in her hometown of Hallsville, Texas.

She came home around lunchtime, had a bite to eat and cleaned her aquarium, Norwood says. Afterward, she went out again to play with friends.

Close to 5 p.m., Kimberly called her mother from a friend's house, asking if the girl could sleep over at the Norwood home.

Norwood said no, because she ''really didn't care for that little girl.'' Kimberly pleaded, ''But we won't bother nobody,'' Norwood says.

Mother and daughter hung up the phone, both in a bit of a huff. That was the last time they spoke.

About an hour later, Kimberly was reportedly walking with three friends when they went their separate ways less than a mile from Norwood's house. It was the last time anyone saw her.

"We never could figure why, why somebody would take her. I mean we didn't have a lot of money,'' Norwood said. "We were waiting to see if we would get, like, a ransom call or something like that and it never happened.''

We were waiting to see if we would get a ransom call ... and it never happened.
--Janice Norwood, mother
RELATED TOPICS

Kimberly loved riding her horse, named Red Bird. She had a taste for turkey dressing around Thanksgiving and was ''at a giggly stage,'' Norwood says, looking back on the good times.

In the two decades that have passed since their daughter's disappearance, the Norwoods have faced more challenges.

Janice Norwood has survived breast cancer and a heart attack. Her husband had a heart attack and a stroke. In January, he underwent a quadruple bypass.

"It just seems like it's the Morton Salt girl. When it rains, it pours,'' Norwood says. "But we're still here, so I figured there's some reason. If we could just find Kimberly it would all be worth it for sure.''

The investigation is open and all leads are actively investigated. But no ''legitimate suspects'' have emerged in the 21-year-old case, says Tom McCool, the sheriff of Harrison County, Texas.

"There's never been any evidence that would support an indictment or arrest,'' McCool says, adding that none of the original persons of interest in the case have been excluded. He declined to provide more details.

Retired homicide investigators from the Vidocq Society -- a Philadelphia, Pennsylvania-based crime-solving club of former and active forensic experts, FBI profilers, scientists, psychologists, prosecutors and coroners -- examined the case and came up with nothing, according to McCool.

Kimberly would be 34 on October 12. Norwood ardently insists that Kimberly ''will be'' 34, repeating that she believes her daughter is alive.

"This is not something any parent should have to go through," she says, breaking into tears.

At the time of her disappearance, Kimberly was wearing a white T-shirt with red and black cows and the words "milk dudes" printed on it.

She had dark jeans, white socks, black Keds sneakers, a black hair bow, a Swatch wristwatch and rings, including a gold ring with an aquamarine stone. Norwood's mother had given her that ring on her 16th birthday, and years later Kimberly asked her mother if she could wear it.

"She had long fingers and long legs. She was real leggy,'' Norwood said.

Kimberly was about 5 feet 4 inches and 100 pounds, with brown hair, brown eyes and a two-inch scar on her abdomen from kidney surgery, according to her mother and missing person posters.

If you have information on the Norwood case, call the Harrison County Sheriff's Office at 903-923-4000 or the National Center for Missing & Exploited Children at 1-800-THE-LOST.