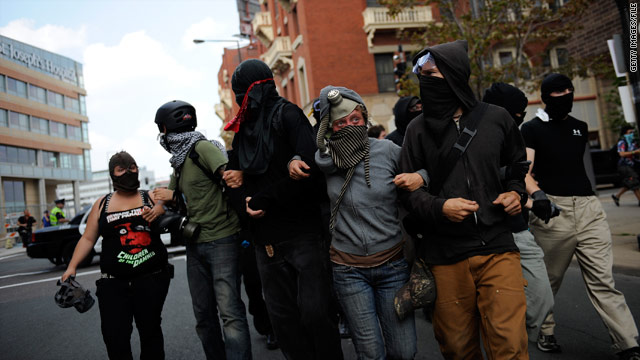 A coalition of groups that protested at the GOP convention in Minneapolis-St. Paul in 2008 called Friday's raids "harassment."
STORY HIGHLIGHTS
RELATED TOPICS

(CNN) -- Political and anti-war activists in the Midwest said they were the target Friday of searches the FBI called part of an investigation into the "material support of terrorism."

Warrants led to the search of five residences and one office in Minneapolis, Minnesota, said FBI spokesman Steve Warfield, who said there were no arrests. Two other searches were conducted in Chicago, Illinois.

Activist Tom Burke in Chicago said he and others in Minnesota, Illinois and Michigan were served subpoenas to testify before a grand jury. He also said computer hard drives were taken from locations in both cities, as well as a cell phone in Minneapolis.

Warfield would not comment on that statement or provide details of the searches.

He also would not discuss the investigation, other than indicating it is the work of a joint task force on terrorism.

The Minneapolis searches were concluded by mid-afternoon Friday, Warfield said. Burke said many agents were still at a Chicago location Friday afternoon.

A coalition of groups represented on the Fight Back website released a statement condemning the raids as "harassment."

"We see them as a way to impair our freedom of speech," said Burke, a member of the Colombia Action Network. "We've done nothing wrong."

The coalition came together after a large anti-war protest at the Republication National Convention in Minneapolis-St. Paul in 2008, Burke said.

"We agree the U.S. should treat neighbors in peaceful ways," said Burke, pointing to conflict in the Middle East and Colombia. "We think they [the FBI] are on a fishing expedition."

Among the groups the activists are involved with are the Palestine Solidarity Group, the Freedom Road Socialist Organization, the Twin Cities Anti-War Committee, and Students for a Democratic Society, which was active during the Vietnam War.

One of the apartments searched in Minneapolis belongs to Mick Kelly, an anti-war and government protestor, CNN affiliate KARE reported. Kelly said the search warrant indicated agents were looking for evidence of his travels to Latin America and Palestine.

Jessica Sundin of the Twin Cities Anti-War Committee told CNN agents took a hard drive, paper files, photos, a cell phone and her passport during a search of her Minneapolis residence Friday.

Denying any wrongdoing, Sundin said she was given a subpoena to appear next month before a grand jury in Chicago. She said she will not cooperate with federal investigators, but will talk to lawyers before deciding whether to appear.

Sending American weapons and troops abroad is not the solution to international problems, Sundin said.

"We've been unapologetic in our opposition to U.S. intervention," she said.

The task force carrying out the raids comprised a number of local and federal agencies, KARE said.