Atlanta, Georgia (CNN) -- In a statement read on a syndicated radio show Thursday, Atlanta-based megachurch pastor Eddie Long denied he had coerced young male church members into sex, as alleged in three lawsuits filed against him.

"I have been through storms and my faith has always sustained me," Long, pastor of the 25,000-member New Birth Missionary Baptist Church said in the statement, read by attorney Craig Gillen on the "Tom Joyner Morning Show." "I am anxious to respond directly to these false allegations, and I will do so. However, my lawyers counseled patience at this time."

"Let me be clear: The charges against me and New Birth are false," the statement said. "I have devoted my life to helping others and these false allegations hurt me deeply, but my faith is strong and the truth will emerge."

Long asked for patience "as we continue to categorically deny each and every one of these ugly charges" and requested prayers for himself, his family and the church. He said he will respond to his congregation from the pulpit on Sunday.

Later Thursday, Long posted a message on Twitter reading, "Thanks for all your prayers and support! Love you all."

"These false allegations are an attack on Bishop Long personally," Gillen said. "They are an attack on New Birth, the entire church and all of its 25,000 good people who attend that church, and it's an attack on the mentoring program that has helped thousands of young men. It is deeply, deeply unfortunate that these allegations have been made. They will be met."

Gillen was interviewed by Roland Martin, a syndicated columnist and CNN political analyst, during Martin's segment on the Joyner show. Gillen said he is to blame for Long's failure to appear on the radio show as scheduled. Asked about a Thursday press conference that was also canceled, Gillen said he thought the matter was a misunderstanding, as he had never committed to a press conference.

"That's my call," he told Martin regarding the interview and press conferences being canceled. "In assessing the situation, no lawyer likes to have his client in a situation where ... charges are made and the lawyer doesn't have control."

Attorney B.J. Bernstein, who represents the three men named in the lawsuits, said Long sent two photos of himself wearing tight shirts to a fourth man not named in the litigation. She said it was an example of inappropriate conduct.

Gillen defended the photos during an interview with an Atlanta radio station Thursday.

"The photos don't corroborate these charges," Gillen said on V-103's "Frank and Wanda Morning Show." "[Long] is a health advocate, he's a weight-lifter. He's a fellow who's gonna go to work and he's gonna have on a muscle shirt. And you know he may show up in church in a muscle shirt. There's nothing really in those photographs that seems to me corroborative of these allegations."

Long's supporters stressed he has been a mentor and guiding force for young men.

A YouTube video shot at New Birth shows Long talking with a man who gives a testimonial about turning away from a life of crime. The unidentified man points to Long and said he "has always been my dad when I didn't have a dad."

Long spokesman Art Franklin said the video shows the kind of spiritual impact Long has had on young men.

The third lawsuit joined two that were filed on Tuesday, all of them in DeKalb County, Georgia. It was brought on behalf of Jamal Parris, now 23, who like the others was a teenager when he joined Long's church.

The suit, which claims Long encouraged Parris to call him "Daddy," also names the church and Long's LongFellows Youth Academy as defendants.

The new lawsuit gives intimate details about Parris and his alleged relationship with Long.

Parris joined New Birth in 2001, when he was 14. Long counseled Parris when the latter talked about his strained relationship with his father and got him a job as a summer camp counselor at the church, the suit states.

It says Parris left the church in late 2009, "disillusioned, confused and angry about his relationship with Defendant Long." The bishop manipulated and deceived Parris into thinking that the acts were a "healthy component of his spiritual life," the suit states. 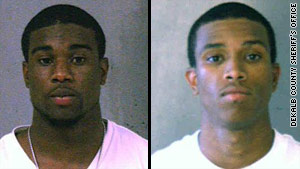 The allegations are similar to those contained in the Tuesday suits, filed on behalf of Anthony Flagg, now 21, and Maurice Murray Robinson, now 20. All three contend the LongFellows Youth Academy and New Birth knew or should have known of Long's behavior and that they failed to warn the young men. The lawsuits describe LongFellows as an offshoot of New Birth.

Bernstein has alleged Long had a pattern of using his position as a spiritual authority and bishop to coerce young male members and employees of the church into sex. CNN was the first to report on the lawsuits.

But "this church and this bishop have been devoted to giving to the community and giving back to young men," Gillen said Thursday.

Long is considered one of the nation's top African-American preachers. His church was the site of Coretta Scott King's 2006 funeral, attended by then-President George W. Bush and three former presidents. King was the widow of the Rev. Martin Luther King Jr.

Bernstein, who represents Parris, Flagg and Robinson, said Wednesday that the youths' accounts are "really strong."

She said she has worked with sexual abuse victims and finds the two believable because of "the emotion. The intensity. The very strong description of what sexual acts occurred. ... This is not just someone giving a vague thing, 'Oh, yeah, one time he did this,' or a couple of times."

Gillen noted that Robinson was charged in connection with a June burglary of Long's office, and said he is attempting to get tapes that have been turned over to the district attorney's office.

Bernstein said Wednesday that about $100,000 worth of items were taken, including black diamonds. She said the theft stemmed from Robinson's anger at Long and was an attempt to retaliate against him.

Asked the motive for the suits, Gillen said, "Let me put it this way. What is the motive of someone putting a ski mask over their face and breaking into your office to steal things? Money."

He said the suits, "without a single piece of corroborating evidence, (have) ignited a firestorm against this good man."

Long spokesman Franklin told CNN Wednesday the church employs many young people, and numerous people travel with Long. Gillen said the young men are taken on such trips to expose them to cultures and diversity they might not otherwise have the opportunity to experience.

Asked how she can prove that sexual contact took place, Bernstein said Wednesday, "I am ready to put them under oath. Bishop Long can spend money on the best attorneys in this world, and they can question those young men, and then I'll get to question the bishop, and then we'll really see what's going on."

Long frequently denounces homosexual behavior. A 2007 article in the Southern Poverty Law Center's magazine called him "one of the most virulently homophobic black leaders in the religiously based anti-gay movement."

The suits allege that Long chose the plaintiffs to be his "Spiritual Sons," a program that allegedly includes other young men from the church.

"Spiritual Sons are taken on public and private jets to U.S. and international destinations, housed in luxury hotels and given access to numerous celebrities including entertainment stars and politicians," the suit alleges.

Flagg's suit says that Long presided over a spiritual "covenant" ceremony between the two of them. Bernstein described it as "essentially a marriage ceremony, with candles, exchange of jewelry and biblical quotes."

The lawsuits are seeking unspecified amounts of punitive damages from Long on various counts, ranging from negligence to breach of fiduciary duty.

CNN's John Murgatroyd and Ed Lavandera contributed to this report.