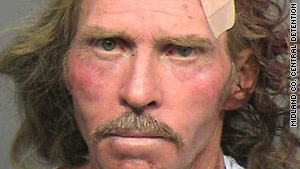 Victor White, 55, was arrested Saturday after an almost daylong standoff with police.

(CNN) -- A man accused of shooting a civilian and two law enforcement officers turned himself in after setting his home on fire Saturday afternoon, Texas police said.

Victor White, 55, faces two counts of attempted capital murder, and Trooper John Barton of the state Department of Public Safety said more charges were possible as the investigation continues. White turned himself in about 2 p.m., almost a day after police say he shot the three men on his property in west Odessa.

"Just after setting his house on fire for some reason we don't know at this time, he walked toward one of our law enforcement armored vehicles and gave himself up," Barton said.

White was taken to Medical Center Hospital where he was being treated for burns.

Though authorities are still trying to determine what precipitated the incident, Barton said police allege White has links to white supremacist organizations and to the separatist group Republic of Texas, which was involved in 1997's Fort Davis Resort standoff.

White's 3- to 4-acre property was littered with trash and included a trailer, abandoned vehicles and a dirt mound, which Barton described as fortress-like and equipped with trenches and "fighting positions."

"He pretty much lived off the grid," Barton said.

The standoff began late Friday afternoon when Luke Bedrick and Deputy Ricky Tijerina arrived at White's property. Though local media reported Bedrick and the officer were there to repossess something from White, Barton said it was unclear what prompted the shootings.

Barton confirmed, however, there was a dispute between White and Bedrick.

White shot Bedrick and Tijerina and later shot Sgt. Steve McNeil when he arrived on the scene, Barton said.

McNeil was shot once while Tijerina was shot twice -- once in the neck and once in the shoulder, said Sgt. Gary Duesler, spokesman for the Ector County Sheriff's Office. Both officers are "awake and talking" and in stable condition, he said.

Bedrick was shot once and has been released from the hospital.

Duesler said during the standoff that White "has a history of not liking law enforcement. [He] doesn't like what it stands for in general and sees it as a threat to his rights."

Several armored vehicles and SWAT teams were among the resources available to the 100 or more officers who responded to the scene, some from as far away as Lubbock and Austin. The Texas Rangers also assisted in the operation.

White reportedly stole an officer's car and was using the police radio to threaten deputies, Duesler said. The suspect then fired random shots at both police and at a helicopter throughout the night and the morning.

Police found weapons on White's property following the standoff, but Barton said he was not sure what caliber or how many.