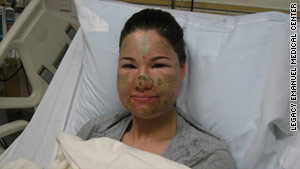 Read more about this story at CNN affiliate KATU.

(CNN) -- A 28-year-old woman who said an unknown assailant threw a cup of caustic liquid in her face has admitted her injuries were self-inflicted, Vancouver, Washington, police said Thursday.

Bethany Storro was being interviewed by detectives, and whether she will be charged will be up to prosecutors, police said.

"She is extremely upset," said police Commander Marla Schuman. "She is very remorseful. In many ways it got bigger than she expected."

Police would not speculate on Storro's motives, only saying the August 30 incident did not occur as she described and that there were discrepancies in her account, including wearing sunglasses in the evening.

They also had questions about the liquid's splash patterns on Storro's face.

Officers acquired a search warrant and conducted a search Thursday morning. They removed several undisclosed items, but said they did not find a substance that might have caused her injuries.

Vancouver had searched for an assailant, described as an African-American woman with an athletic build and slicked-back hair pulled into a pony tail.

Storro was released from an Oregon hospital on September 5 after undergoing surgery for her injuries after the alleged attack.

Police spent hundreds of hours on the case and the community came together to offer donations for Storro's treatment.

Storro's family was also being interviewed, police said. They described her as being in a fragile mental state.

Storro credited a new pair of sunglasses -- which she said she bought just 20 minutes before the attack -- with saving her eyesight.

"God is watching over me," Storro, of Vancouver, told CNN affiliate KATU in Portland, Oregon, at the time. "I believe in him. That his hands are on me and I can't live the rest of my life like that -- in fear. I can't let what she did to me wreck my life."

Storro told KATU that she had stopped at a Vancouver Starbucks about 7:15 p.m., just after she had gone back to buy a pair of sunglasses that she had seen earlier. The woman walked up to her and said, "Hey pretty girl, do you want to drink this?"

When Storro declined, the woman threw the contents of the cup in her face and ran off, Storro claimed at the time.