Teen died 8 years ago. Who is she? 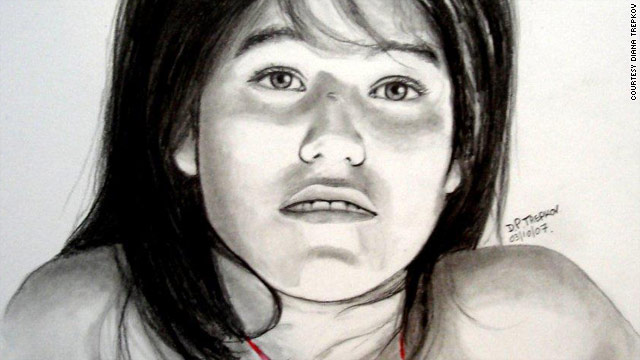 A young woman's body was discovered the morning of April 27, 2002, in Tempe, Arizona. Police want to know who she was.
STORY HIGHLIGHTS

(CNN) -- No one has come forward to identify the young woman whose body was found more than eight years ago behind a strip mall in Tempe, Arizona.

She was between 15 and 19. She was of Latino, Native American or biracial descent, with straight dark hair and brown eyes.

Her death, caused by cocaine intoxication, was ruled neither an accident nor a homicide.

"We've done everything we absolutely could have to try and identify this person," said Christen Eggers, an investigator at the Maricopa County Medical Examiner's Office.

The young woman's body was discovered the morning of April 27, 2002, by an employee at the mall at University and McClintock drives, not far from the campus of Arizona State University.

She was wearing a red halter top, blue jeans with a side zipper, blue underwear and one black shoe. She was about 5 feet tall, weighed 125 pounds and her fingernails were partially coated with purple nail polish. A case of CDs was found near her body.

We've done everything we absolutely could have to try and identify this person.
--Christen Eggers, investigator

"We looked at those CDs to see if there were any fingerprints on it and there were," Thompson said. The prints led police to a local woman who said the CDs belonged to her and that she had last seen them in her vehicle.

She said she had no idea who the dead woman was, but that her boyfriend had access to her vehicle on the day the body was found, Thompson said, recounting what the woman told police.

Investigators talked with the boyfriend, who said a woman he did not know waved him down as he drove by the mall. According to Thompson, the boyfriend said he told police he picked up the woman, and she asked him to drive her to a nearby store.

Minutes later, she changed her mind and asked to be driven to another location, where she met with a male who got into the back seat and sold her cocaine. The driver communicated with the young woman in Spanish, he said.

"During the ride, she mentioned she'd just been kicked out of her house and didn't have anywhere to stay," Thompson said, recalling the driver's account. According to the driver, the young woman snorted the cocaine and went into convulsions.

While Thompson said he believed the investigation showed she had likely snorted a lethal amount of cocaine, he added, "I don't think it was a completely spectacular amount."

Eggers, the medical examiner's investigator, said she could not disclose how much cocaine was found in the dead woman's system.

The driver told police he took the woman out of the vehicle, instructed the man who had been with her in the back seat to call 911 from a nearby gas station and then drove away.

"Whether she fell or was pushed out of a car, or got out on her own, we don't know," Thompson said. "We do have a 911 call that came in from Circle K, but the call was unintelligible."

Thompson said authorities were not able to press charges against the driver, because the medical examiner was unable to determine whether the female was a juvenile or whether she was still alive at the time she left the vehicle.

"There is a statute for concealment of a dead body, but we don't have anything to say she's deceased at the time he dropped her off," he said.

Eggers said the medical examiner typically considers a broad age range when estimating the age of an unidentified person. "You always go a couple years younger and a couple years older," she said, explaining that victim in this case was likely about 17.

The investigation focused on the area near where the teen's body was found. Her clothing was not of a particular brand that was specific to any region, Thompson said.

"I still find it odd that nobody's come forward yet," Thompson said. "We've just got nothing. We do hope that at some point we will at least be able to tell her family."

"What's very strange about it is we don't even know if we have matches," Eggers said. "Usually with a missing person, we'll compare the dental records or DNA and rule out a lot of cases, but so far there's been no one we've compared her to."

The woman's fingerprints, dental records and DNA and other identifying information have been entered into identity databases, including CODIS and NCIC.

Eggers said her office works closely with the Mexican consulate, as well, in efforts to help identify deceased persons who remain unidentified and who may have been reported missing in Mexico.

Anyone with information about the case can call the Tempe Police Silent Witness Line at 1-480-WITNESS.