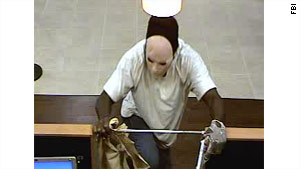 A man robbed an Atlanta, Georgia, bank on Tuesday, but according to the FBI, he may have made a critical error.

Read more on this story from CNN affiliate WSB.

Atlanta, Georgia (CNN) -- A brazen gunman wearing a porcelain doll mask robbed an Atlanta, Georgia, bank and made off with a stash of money, the FBI said.

However, authorities said the bank robber waited a little too long to put on his mask. The FBI has clear pictures of him looking nervous as he enters the bank Tuesday morning before he donned the mask.

The photos may be the key to catching him, according to authorities.

"Two very detailed photographs of the robber's face were taken by the bank's ATM machine just prior to the robber placing the mask over his face," the FBI said in a news release.

The man entered the Chase Bank, put on the porcelain doll-type mask and jumped on the counter of the bank, brandishing a silver semi-automatic handgun, the FBI said.

Close-up photos of the man taken before the robbery show his facial hair and prescription glasses.

"Sometimes, the investigators that work these bank robberies do get lucky in terms of the robbers doing something stupid, leaving something behind that is an incredible investigative lead," Steve Emmett, a spokesman for the Atlanta FBI office, told CNN affiliate WSB.