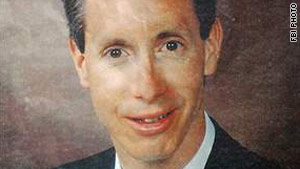 Warren Jeffs was indicted in Texas in 2008 on a felony charge of sexual assault of a child.
STORY HIGHLIGHTS

(CNN) -- Polygamist sect leader Warren Jeffs will stay in a Utah jail for at least two more months after his attorneys objected to his signing an extradition waiver in a Utah court Tuesday.

Jeffs will appear in court again on November 15 for a hearing at which the court will determine if Jeffs is the same person charged in Texas.

Jeffs was indicted in Texas in 2008 on a felony charge of sexual assault of a child. The indictment accuses Jeffs of assaulting a child "younger than 17 years of age and not legally married to the defendant" in January 2005.

The "prophet" of the Fundamentalist Church of Jesus Christ of Latter-day Saints -- a polygamist offshoot of the mainstream Mormon church -- was wanted in Utah for allegedly being an accomplice to rape. He was accused of using his religious influence over his followers to coerce a 14-year-old girl into marrying her 19-year-old cousin.

He was sentenced to two consecutive prison terms of five years to life following his 2007 conviction, but the Utah Supreme Court overturned the convictions in 2007 and ordered a new trial. The court said that instructions given to the jury were erroneous.

He faced similar charges in Arizona, but a judge dismissed charges against him after the Mohave County prosecutor requested they be thrown out, citing "much more serious charges" in Texas.

Utah Gov. Gary Herbert signed the extradition warrant to send Jeffs to Texas in mid-August at the urging of Texas Gov. Rick Perry. If convicted on the Texas charges, Jeffs could face a maximum penalty of five to 99 years or life in prison and a fine of $10,000.

But that day in a Texas court will have to wait for a court-ordered extradition.

The Fundamentalist Church of Jesus Christ of Latter-day Saints is a 10,000-member church. Its members openly practice polygamy at the Yearning for Zion Ranch in Eldorado, Texas, and in two towns straddling the Utah-Arizona state line: Hildale, Utah, and Colorado City, Arizona.

Critics of the sect say young girls are forced into "spiritual" marriages with older men and are sexually abused. Sect members have denied that any sexual abuse takes place.