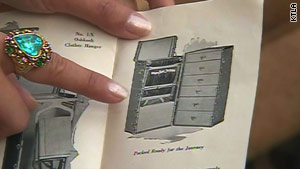 The mummified remains of two infants were found inside a trunk that looks like the one pictured.

Police said last week they have identified the owner of the steamer trunk in which the babies were found and have contacted her family.

The coroner is still trying to figure out how and when the babies -- whose remains were found in two doctor's bags -- died.

"The coroner has done an autopsy on both (babies) and has given us an indication that, at this point, there ... is no determination of death, as to the cause of death," Los Angeles Police Department Capt. Fabian Lizzaraga said at a news conference.

Two women cleaning out a large storage room in an apartment building found the remains last month. The owner of the building, in the Westlake area just west of downtown, had asked the women to clear out the room, which had been abandoned and neglected for many years, the LAPD said.

The women found several antique luggage trunks with the doctor's bags inside one of them. The babies were wrapped in the pages of a 1930s-era Los Angeles Times newspaper, the LAPD said.

Investigators used the other contents of the trunk to try to identify the owner. Photos and negatives found inside depicted a white woman wearing clothing that was also discovered in the trunk, such as a purse and a white fox boa.

Inside the trunk, which was marked with the initials "J.M.B.," investigators found two letters and several Christmas cards addressed to Jean M. Barrie and Janet M. Barrie. Lizzaraga said the investigation has determined the names belonged to the same person.

They found that Janet Barrie was born in Scotland on January 15, 1897, and emigrated to the United States sometime in the mid-1920s, police said. She worked as a homecare nurse for a woman named Mary Downs Knapp between the 1930s and 1964.

After Knapp died, Barrie married Knapp's widower, Dr. George Guy Knapp, but he died four years later, in 1968. Barrie left Los Angeles in the mid-1980s for Canada, where she lived until her death several years later.

Police said they have contacted Barrie's family in Canada.

The building in which the trunks were found dates to the 1920s and has been home to doctors, lawyers, writers and actors, CNN affiliate KABC reported.

Ticket stubs from the 1932 Olympic Games in Los Angeles were found in the trunk along with a diamond necklace, other jewelry, and wedding photos, KABC said, citing building manager Gloria Gomez, who was one of the two women who made the discovery.

One police official told KABC about an interesting news item contained in the newspaper the babies were wrapped in.

"There were some issues involving a John Dillinger shooting, things that were taking place in the city of Los Angeles from that era -- quite historic, quite notable," LAPD Lt. Cory Palka told the station.

Dillinger is one of America's most notorious gangsters, famous for a string of bank robberies, prison breaks, and murders between May 1933 and July 1934.