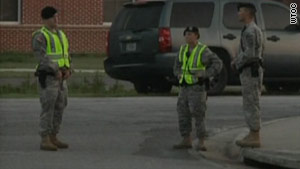 Check out a local report on the hostage situation from CNN affiliate WTOC-TV in Savannah, Georgia.

(CNN) -- A hostage situation that lasted about two hours at Fort Stewart, Georgia, ended Monday without injuries, and a gunman is in custody, a spokesman for the Army base said.

He immediately took one hostage and went to the third floor, which houses the behavioral health unit, where he held two more people at gunpoint, including a nurse practitioner, Larson said.

The nurse, an Army major, was able to calm the man, and authorities started negotiations, Larson said. The gunman, who was carrying four weapons, eventually surrendered and was taken into custody for questioning, he said.

"Everyone is safe, and no one was hurt," Larson said.

Authorities have not identified the gunman.

CNN's Rick Martin and Doug Rink contributed to this report.