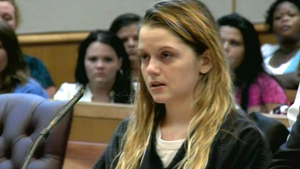 (CNN) -- A Florida judge sentenced Rachel Wade, the 20-year-old woman convicted of second-degree murder for fatally stabbing her romantic rival in a fight last year, to 27 years in prison Friday.

While acknowledging mitigating factors -- primarily Wade's youth and lack of a criminal past -- the judge said her actions were not "unaggravating."

"The murder was no accident," Judge Joseph Bulone said.

Wade went to trial in July, accused of second-degree murder in the stabbing death of 18-year-old Sarah Ludemann. The two women, only teenagers at the time, had fought for months via voicemails, text messages and MySpace postings over their relationship with the same man, Joshua Camacho.

The feud culminated in a fatal confrontation in the early morning hours of April 15, 2009.

After a three-day trial and only two and a half hours of deliberation, a jury of five men and one woman convicted Wade of second-degree murder. Wade had claimed self-defense and hoped for an acquittal or no more than a manslaughter conviction.

A life sentence was recommended by Florida prosecutors. The defense had recommended 15 years, followed by 15 years of probation.

TruTV's "In Session" correspondent Beth Karas spoke to Wade days before her sentencing.

"I think about it every day, regardless if they give me five years or 20 years more than they could give me," Wade said. "I never meant to do it, and I'm still gonna have to live with it, no matter if I'm home or if I'm in prison."

"I just don't think this was a case that called for life," said Jay Hebert.

Hebert said the case is a cautionary tale about the potentially deadly mix of young people and modern communications technology.

"When you start looking at the tragic nature of this, the social networking, the instant messaging, the ability of people to hide behind the screen and make statements and create situations -- it just festered until it bubbled up and exploded into a situation... until two good girls, their worlds collided," he said.

Hebert said Wade has resolved to teach young people about the dangers associated with social networking.

"I don't think we can appreciate how young people talk," he said. "And that's the lesson for parents. Pay close attention to your children. Watch how they talk and who they talk to. Watch their social networking outlets."

"Because it's an explosive situation when when you don't have to be accountable, when you can break up with somebody or ask somebody to prom via text," he said. "There's no face-to-face interaction."

In Session Correspondent Beth Karas contributed to this report.