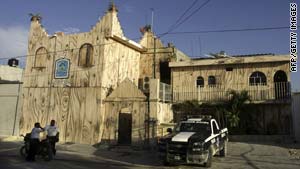 The bar that was attacked in Cancun on Tuesday had a clientele of largely locals.
STORY HIGHLIGHTS
RELATED TOPICS

Six women and two men, all Mexican nationals and employees of the tavern, were killed in the 1:30 a.m. strike, now under investigation by judicial police, according to a release from Francisco Alor Quezada, attorney general for the state of Quintana Roo.

Eight men hurled the explosives at the bar and fled in vehicles, the release said. No shots were fired. Although the tavern is just 5 kilometers from the city's tourist stretch, it sits apart from the area frequented by tourists, and the clientele is composed of locals, it said.

Four of those slain died of burns and the others of asphyxiation, the release said.