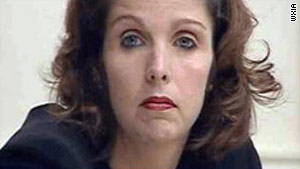 Atlanta, Georgia (CNN) -- Julia Lynn Womack Turner, who was convicted in 2007 of murder for the deaths by antifreeze poisoning of her boyfriend and husband, died Monday in prison in Georgia, prison officials said.

Turner "was found unresponsive in her cell at 6:55 a.m., at which time prison medical staff and EMS responded but were unable to revive her," the Georgia Department of Corrections said in a statement.

The cause of death was under investigation by the Georgia Bureau of Investigation's medical examiner's office. Turner was serving life without parole in the Metro State Prison for women in Atlanta.

Turner was convicted of murder for the 1995 death of her husband, police officer Glenn Turner, and for the 2001 death of her boyfriend, firefighter Randy Thompson, both of whom were poisoned with antifreeze.

Glenn Turner died March 3, 1995, from what was initially determined to be an irregular heartbeat. A week later, Turner moved in with Thompson, with whom she had begun an affair several months prior.

In both cases, the men had exhibited flulike symptoms before being taken to the emergency room. They both died less than 24 hours after they left the hospital, from what a coroner initially identified as heart failure.

Further examination, however, revealed traces of ethylene glycol, a byproduct of antifreeze, in both of their bodies. Cobb County prosecutors labeled the defendant a "black widow" who murdered both men for financial gain.

After her husband's death, Turner received more than $150,000 in benefits and interest from his life insurance and pension. She received about $36,000 from Thompson's death.