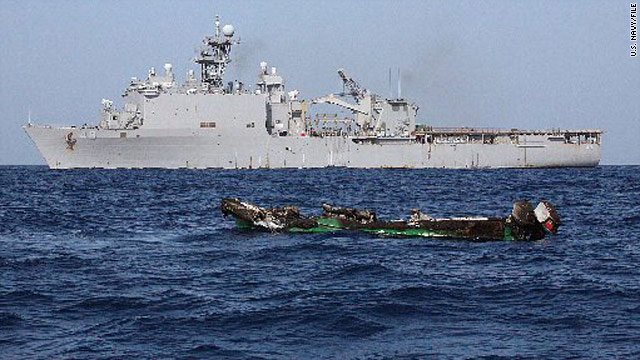 (CNN) -- A Somali man Friday became the second person convicted in the United States of acts related to high-seas piracy in more than a century, although he wasn't convicted of piracy itself.

Jama Idle Ibrahim pleaded guilty in a federal courtroom in Norfolk, Virginia, admitting he had intended to seize a U.S. merchant vessel on April 10 and hold it for ransom.

Ibrahim and five other would-be pirates learned too late that they had instead pulled alongside a U.S. Navy dock landing ship, the USS Ashland, and they were captured.

It followed the May guilty plea in a federal court in New York of a man involved in an attack on the U.S.-flagged Maersk Alabama off the coast of Africa last year.

A statement by the Justice Department said the government and defense agreed to recommend a sentence of 30 years in prison for Ibrahim.

Sentencing was set for November 29.

The attack occurred in the Gulf of Aden between the Horn of Africa and the Arabian Peninsula.

Ibrahim is one of 11 Somalis sent to Norfolk for prosecution in two attacks. Five others are charged in connection with an April 1 attack on the Norfolk-based frigate Nicholas.

Ibrahim pleaded guilty to charges of attacking to plunder a vessel, engaging in a violent act aboard a vessel and using a firearm during a crime of violence. The charge of committing piracy on the high seas, which carried a mandatory life sentence, was thrown out 10 days ago by the judge.

Until this year, there had not been a piracy-related conviction in the United States since 1861, during the Civil War, officials said.

In May, Abduwali Abdukhadir Muse, who was accused of leading the attack on the Maersk Alabama in April 2009, pleaded guilty to felony counts of hijacking maritime vessels, kidnapping and hostage taking.