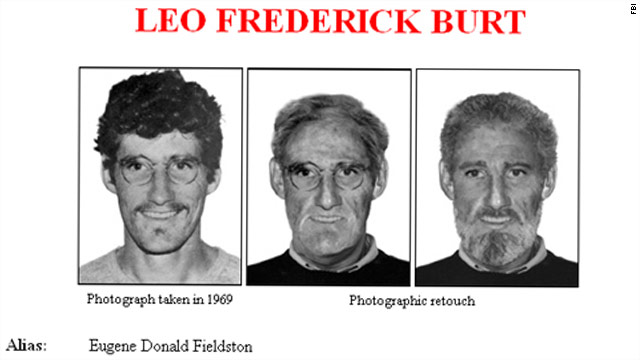 An FBI "Wanted" flyer shows Burt in 1969, and as he might look now.
STORY HIGHLIGHTS
RELATED TOPICS

Burt, a 22-year-old aspiring journalist at the time, was part of a group that bombed the University of Wisconsin to protest the Vietnam War, the FBI says.

The attack happened 40 years ago Tuesday and was classified as the largest act of domestic terror until the Oklahoma City bombing in April 1995.

The explosion killed a physics researcher, severely damaged a building at the university and damaged 26 others.

Burt's three accomplices were arrested and served prison sentences for the crime, but the hunt for Burt continues.

"Even after four decades, we cover every credible lead that comes in," said Special Agent Kevin Cassidy, who has been in charge of the investigation for the past three years. "Despite the passage of time, agents in the field are happy to help."

Agents have been all over the world following tips about Burt's whereabouts.

The elusive suspect was reportedly homeless in Denver, according to one tipster.

Another tipster told the FBI that Burt was working at a resort in Costa Rica.

Burt has eluded the massive manhunt, leading some to believe he is dead, but Kent Miller, a retired special agent who led the hunt for Burt for years, says he believes the suspect may still be alive.

"If so, I don't think he's living in the United States. And if he is alive, he's got to be worried every day that he's going to slip up and get caught. That's no way to live," Miller said.

Burt was part of a radical anti-war group called the New Year's Gang, the FBI said. Angry over the Vietnam War, the group targeted the Army Math Research Center in Sterling Hall at the University of Wisconsin on August 24, 1970.

The chaos after the explosion is captured in scratchy police dispatch audio tapes from that day.

"There's been a tremendous explosion over here. It looks like it's on South Park Street," one officer says.

Police and dispatchers are captured on the tape trying to get a handle of the situation and inform scared citizens who have called in about the explosion. Then, it became apparent that someone had been killed.

"They're requesting the coroner down at the Army Math Center," one man said.

"No kidding?" another man answered.

"Yeah, it's one hell of an explosion," the first man said.

"Yeah, I believe it did," the second man answered.

The victim in the bombing was identified as Robert Fassnacht, a 33-year-old father of three children who was working late on campus to finish a research project.

Now, the FBI is offering $150,000 to someone who has information that leads to the arrest of Burt.

"We need your help to locate Leo Burt. If you have any information, please contact your local FBI office or the nearest U.S. Embassy or Consulate," the FBI says in a statement.

Burt could be going by the name Eugene Donald Fieldston, the FBI says.

He could be wearing a mustache or a beard. He has sometimes worn his hair long and his locks may have gone gray.

Just like some of the FBI agents who have chased him all these years.