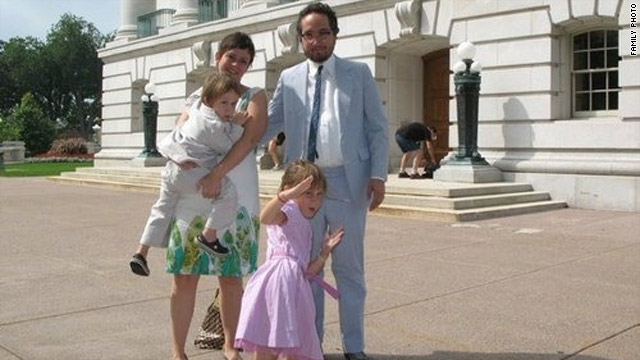 Read more on the story on CNN affiliate WISC-TV in Madison, Wisconsin.

(CNN) -- In today's technology-laden society, hearing of crimes solved or cold cases cracked with state-of-the-art tech tools has become commonplace. But for one New Jersey family all it took to catch an alleged thief was a camera and a little luck.

John Myers and his family from Bloomfield, New Jersey, were visiting Madison, Wisconsin, to attend a friend's wedding Saturday at the state Capitol.

According to Myers, the family went outside after the ceremony to take pictures. He decided it would be a good idea to take a family portrait with his digital camera, and he set a bag down next to the building before stepping away to snap the shot.

Unbeknown to him, Myers -- as he captured the scene -- also caught a person red-handed stealing his bag.

"Looking back now it wasn't a good idea to leave my bag so far away," Myers told CNN on Tuesday. "But I just wasn't thinking of it at the time."

Video: Security: There's an app for that?
RELATED TOPICS

Myers looked at the picture quickly but admits he was checking just to make sure everyone came out OK. It was only after walking away that he realized he had forgotten his bag -- which contained his wallet, hotel and rental car keys and other family valuables.

Myers said that when he returned to the spot, the bag was missing. No one had turned it in at the information center inside the Capitol.

He realized then that someone must have taken it. After stepping outside the building and seeing wedding photographers, he decided to take a second look at the pictures he had just taken.

It turned out to be the right hunch. In the background of the family portrait, Myers saw an image of someone reaching into his bag as it sat. He took it to the Wisconsin Capitol Police, which immediately went into action.

"The Capitol Police are amazing," Myers said. "I fully expected to have them tell us to just fill a report [out] or [to] tell us there wasn't much they could do, but [they] responded immediately and because they did, they were able to catch [a suspect]."

After Myers showed the pictures, two officers were immediately dispatched to look for a suspect, while a third stayed with Myers and sent out a description.

Within 15 minutes, Myers said, police had arrested a suspect and also located the bag and all his belongings, some of which had been thrown away during the heist.

According to Wisconsin authorities, a homeless man identified as Glenn R. Lambright was arrested. He was released Tuesday from Dane County Jail on a signature bond. It was not known Tuesday night whether Lambright had an attorney.

"I caught the picture, but I was even more amazed they managed to find the person since all they had to go on was his clothing -- his face wasn't in the picture," he said.