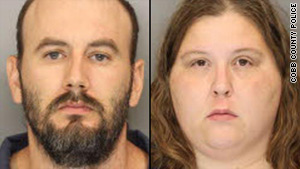 Atlanta, Georgia (CNN) -- When police walked into the home, they found a 5-year-old girl weighing nearly 160 pounds, her teeth rotting, her skin covered in spider bites. Her 4-year-old sister was lying on a filthy mattress, wearing only a urine-soaked diaper.

Police were responding to a domestic dispute call at the Marietta, Georgia, house Monday when they encountered the shocking scene. They called in child abuse investigators, and ultimately arrested the parents, James and Anne Cardona, charging both with second-degree child cruelty, Cobb County police spokesman Joe Hernandez said.

The children are now in the state custody. Their parents were released on bond, but Anne Cardona was arrested again late Thursday for giving "misleading information" to a magistrate judge at the couple's first court appearance Tuesday, said Col. Milton Beck of the Cobb County sheriff's department.

She remained in jail Friday without bond until further notice from court, he said. Attempts to reach her husband were unsuccessful Friday, and it wasn't immediately clear whether they had retained legal counsel.

Asked by CNN affiliate WSB-TV on Thursday whether the children were mistreated at the home, Anne Cardona said no.

Police had only stopped at the family's home in the Atlanta suburb one other time, more than a year ago, but hadn't observed anything like they saw Monday, Hernandez said.

The house "stunk of urine and mold," according to the arrest warrants for the Cardonas. It is "infested with roaches, [fleas], cobwebs and gigantic spiders," the documents said.

The bathroom and shower are covered in black mold and dirt, they said.

Neither girl is enrolled in school. Both are severely obese. The older daughter, who weighs 158 pounds, could not walk 10 feet without "becoming out of breath and wheezing," officers said. The younger child weighs 89 pounds and still drinks from a baby bottle. Her feet were blackened with dirt, her skin also covered in insect bites.

"A situation like this is tragic -- tragic for the family, but mostly for the kids," said Normer Adams, executive director of the Georgia Association of Homes and Services for Children, a trade group representing a range of agencies, including foster homes and family support programs.

"This is an extreme case of neglect by the parents," he said. "These kids are hurting on many levels -- certainly educational development, and probably social development."

Adams said it's unlikely that the Cardonas would be able to regain custody of their children, saying it's "too late" for the family to avoid foster care.