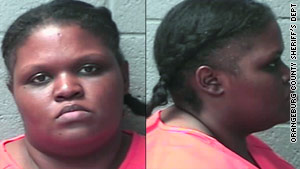 Shaquan Duley, 29, is facing two counts of murder in the deaths of her sons, the Orangeburg County sheriff says.
STORY HIGHLIGHTS

(CNN) -- Unemployed, single and apparently fed up with criticism from her mother, a 29-year-old Orangeburg, South Carolina, woman suffocated her two toddlers with her bare hands before strapping them into car seats and submerging her car in a river, authorities said Tuesday.

Shaquan Duley is facing two counts of murder in the deaths of her sons, ages 1 and 2, said Orangeburg County Sheriff Larry Williams. She is set to appear in court Wednesday.

"She was a mother that was unemployed. She had no means of taking care of her children," Williams told reporters. "She lives with her mother and her mother was a very, I guess, firm individual. ... She often talked with her daughter about, I guess, maybe being more of a mother or being more reliable."

Mother and daughter argued the night before the children's bodies were found early Monday in Duley's Chrysler sedan, submerged in the Edisto River, he said.

"We believe this is a direct response (to the argument) from Ms. Duley," he said. "I believe she was just fed up with her mother telling her she couldn't take care of the children and she wasn't taking care of her children and she just wanted to be free."

However, he said, "this wasn't a hardened criminal. This was a young lady in trouble, in trouble in more ways than she realized." Duley has no previous criminal history, he said.

Under questioning, Duley told authorities she smothered the boys by putting her hand over their mouths at the Trumps Inn in Orangeburg, Williams said. She drove them to the river while "trying to find a way to discard the bodies," he said.

"She just wanted to get rid of the children, as sad as it may be," Williams said. Authorities do not know how long the boys had been dead before they went into the water, he said.

Duley initially reported that she had lost control of the car and it had rolled into the river. But authorities from the outset believed her story didn't add up, Williams said. Her clothes were dry, he said, and there were no skid marks or other indications of an accident at the scene.

In addition, Duley reported she had walked a mile before flagging down a motorist to call for help, Williams said previously. The sheriff told CBS' "The Early Show" that she could have run to residences nearby.

Authorities responded to a report of a car accident near a boat landing on the river Monday, and divers found the children's bodies.

Williams said Monday he couldn't confirm reports that the key was still in the car's ignition, but he said the car apparently was in neutral.

Ramona Milhouse told CNN she lives next to the boat landing, and her house and a neighbor's house are clearly visible from the road. She said she was at home around the time Duley told authorities she lost control of her car.

"I don't know why the young lady would walk that far when we are here, that's easy to see, and we have phones so we could have called someone for her," Milhouse said.

In addition, she said, the road near the landing is a busy one. "It's not a quiet country road," she said. "There's a lot of people driving up and down, all parts of the day and night."

She said she did not see the car go into the water, but heard sirens as authorities responded.

"When I heard what happened, I just couldn't go to sleep at all, thinking about those two little boys," she said.

It wasn't immediately known whether Duley had retained an attorney.

Williams described Duley as distraught, but said she showed no signs of remorse.

"I don't believe she woke up and said, 'I'm going to the Shillings Bridge Road to get rid of my children,'" he said. "Of course, that hasn't been determined. I believe she was just angry, upset and for some reason found the boat ramp, but mind you the children were deceased ... so (she was) trying to find a way to discard the bodies."

The father of the two children has not been found, Williams said. Duley "was more or less being mother and father for the children," he said.

"The mom has basically been a good mom," he said, but was just unable to financially support the children. "For whatever reason, this was her weakest moment," he said.

The South Carolina Department of Social Services has no record of prior involvement with Duley, department spokeswoman Marilyn Matheus said.

The incident has striking similarities to a 1994 case, also in South Carolina. The bodies of Michael Daniel Smith, 3, and 14-month-old Alexander Tyler Smith were found in their mother's car, still strapped into their car seats, in John D. Long Lake in Union, South Carolina. Their mother, Susan Smith, was convicted on two counts of murder, but jurors opted to spare her the death penalty and she was sentenced to life in prison.

The case inflamed racial tensions in Union, because Susan Smith claimed at first she had been carjacked by an African-American man. She stuck to that story for nine days, issuing tearful pleas for her sons' return on national media outlets, before confessing to authorities. Prosecutors alleged she killed her children after being rejected by a man she was dating who did not want children.

Duley spent two years as a cashier at a Dairy-O fast-food restaurant a couple of years ago, said assistant manager Grace Simpson.

"She was such a good-natured person, very friendly, but quiet," Simpson recalled. "Never disciplined. Never in trouble with our boss. She left because she chose to. We don't have health insurance here, and she wanted to just move on and up with her life maybe."

At the time Duley worked for Dairy-O, she did not have children, Simpson believes. Simpson did not know if she was married at the time.

"Whatever compelled Shaquan to do what she did ... Lord please be with her," said Simpson. "I cannot judge Shaquan. I will not judge her. But God, be kind to her."