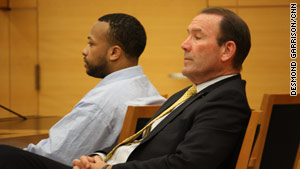 New York (CNN) -- Two men have been sentenced to lengthy prison terms in New York for the brutal beating death of an Ecuadorian immigrant nearly two years ago.

Jose Sucuzhanay died in December 2008, five days after he and his brother were beaten by two men as the Ecuadorians were walking home late at night from a New York City church party. The brothers were walking arm in arm, and the two assailants yelled anti-gay and ethnic slurs as they beat the victims.

Sucuzhanay, 31, was hit in the head with a bottle and beaten with a baseball bat. He died in a Queens hospital five days after the beating.

The death drew widespread condemnation in New York and elsewhere. Hundreds of people marched through the Brooklyn neighborhood where Sucuzhanay was attacked, carrying signs saying, "No more hate crimes."

Sucuzhanay's brother, Diego Sucuzhanay, told CNN his brother would always be remembered as the victim of a hate crime and it was time for him and others to speak out.

Family spokesman Francisco Moya said Jose Sucuzhanay had lived in the United States for more than a decade and was a legal resident.

Another Ecuadorian immigrant had been slain the month before Sucuzhanay, in Patchogue, New York, about 50 miles east of Brooklyn on Long Island. Police said Marcello Lucero, 37, was stabbed in the chest as he walked to a friend's apartment. In May, teenager Jeffrey Conroy was sentenced to 25 years in prison for manslaughter as a hate crime.