A pardon for the notorious Billy the Kid? 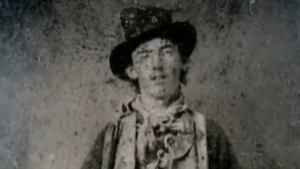 (CNN) -- Billy the Kid is dead and probably doesn't care, but a pardon for the cold-blooded killer may be in the offing.

Gov. Bill Richardson, called a "Billy the Kid buff," is looking at an old promise by another governor, and not the Kid's reputation, in deciding whether to issue a posthumous pardon, a spokeswoman said Thursday.

No matter that Billy the Kid has been in the ground since 1881. That hasn't dimmed interest in the cattle-rustling outlaw. Tourists, especially from Europe, are fascinated with Billy the Kid, born Henry McCarty, but also known as William H. Bonney and Henry Antrim. He died at the hands of Sheriff Pat Garrett when he was only 21.

New Mexico's tourism website even has a travel guide to Billy the Kid territory.

"His nickname carries a lyrical quality that still gallops across the high plains of our imagination," according to the text next to the only known photograph of Bonney.

"If he does anything, [Richardson] will review the promise made by Lew Wallace to Billy the Kid," Alarie Ray-Garcia, Richardson's communications director, said Thursday, a day after the governor met with descendants of Garrett.

The Garrett family and others oppose the pardon. Besides arguing that Billy the Kid was an incorrigible killer, they want to make sure Pat Garrett is absolved of wrongdoing related to the killing and a Bonney jail escape.

Jarvis Patrick Garrett, 51, two other grandchildren and two great-grandchildren of Pat Garrett met for an hour with Richardson.

"People had forgotten that Pat Garrett was one of the first individuals to bring law and order to Lincoln County," Jarvis Garrett said.

This latest chapter in the story of Pat Garrett and Billy the Kid has more twists than a lariat.

They asked Richardson to sign a petition signed by 100 people that reads, "Whereas we the undersigned accept and agree the traditional history of Sheriff Pat F. Garrett and Billy the Kid (William Bonney), and believe that Billy the Kid died at Pat F. Garrett's hand. Therefore we oppose a postphumous (sic) pardon for Billy the Kid as Brushy Bill Roberts."

Garrett killed Bonney on July 14, 1881, in Fort Sumner weeks after Bonney escaped from a jail. The sheriff, legend has it, was hiding in the dark and shot Bonney when he entered a room.

Richardson "agrees with the heart of the petition," but is asking his legal department to look at it, Ray-Garcia said.

But the petition doesn't affect the Lew Wallace matter.

Mark Lee Gardner, author of "To Hell on a Fast Horse: Billy the Kid, Pat Garrett, and the Epic Chase to Justice in the Old West," called for a pardon in an op-ed piece last month for the Los Angeles Times.

According to Gardner and other historians, Billy the Kid wrote to Wallace, then the New Mexico territory's governor, asking him to honor a deal. Wallace had promised to grant Bonney amnesty for his role in shooting Lincoln County Sheriff William Brady and other "misdeeds" if he agreed to testify before a grand jury investigating another murder. The pardon didn't happen. The Garretts argue Bonney decided to flee house arrest, making the pardon moot.

"Still, regardless of Billy's crimes, the motives of Richardson or the hollowness of posthumous justice, it all comes back to Wallace's promise. A deal is a deal, and 129 years doesn't change that. Billy is owed a pardon," Gardner wrote.

"I am very passionate about this," Garrett said. "He [Bonney] was a killer."

Garrett, who was not at Wednesday's meeting but has written to Richardson, said Wallace did not exonerate Bonney.

"I think he might be better off doing something else," Bill Garrett, a retired bailiff, said of Richardson.

Richardson has been interested in Billy the Kid officially since 2003. "He thought it would be interesting to review this promise by Lew Wallace," said Ray-Garcia.

A sheriff, a deputy and others got involved and moved to have the bodies of Bonney and his mother exhumed for DNA testing to prove they are buried at the Fort Sumner Cemetery. But a judge ruled against the efforts.

Richardson wasn't interested in that aspect and the group's interest in whether Bonney became "Brushy Bill" Roberts, Ray-Garcia said. Ray-Garcia disputed contentions that the sheriff was following orders from Richardson.

According to a letter the Garretts wrote to the governor, Richardson declared support in 2003 for reopening the investigation of Bonney's death.

The investigation cited probable cause for allegations that Garrett killed an innocent victim instead of Bonney and that person is buried in the outlaw's grave, the Garretts said. There also were allegations the sheriff was an accomplice of Bonney in the murder of two deputies in April 1881 and the rustler's subsequent escape.

"This is an abomination as well as an inexcusable defamation of a great man," the letter said of the claims.

Ray-Garcia said Richardson, who leaves office in five months, had nothing to do with the probable cause claims. "The governor told them [the Garretts] that Sheriff Garrett was an honorable man."

She also denied state money went toward the investigation.

Former Lincoln County Sheriff Tom Sullivan was among those involved in the investigation. He opposes the pardon, saying Billy the Kid "was nothing but a glorified cop killer," but said there are many questions about the circumstances of his death and Garrett's conduct.

He said he raised the probable cause questions so that an investigation would glean what really happened with Garrett and Bonney.

"Nobody wants to know the truth," Sullivan said Thursday.

Jarvis Garrett and others in the family said they will continue their campaign to clear Garrett, who they said enjoyed a little gambling.

They are hoping Richardson won't issue a pardon.

"If Billy the Kid was living amongst us now, would you issue a pardon for someone who made his living as a thief and, more egregiously, who killed four law enforcement officers and numerous others?" the Garrett family wrote Richardson.

Author Gardner said there is a reason for an abiding interest in Bonney and curiosity about whether he actually died in the dark and did not escape.

"If you have a folk hero die, you want him to go out with a blaze of glory."