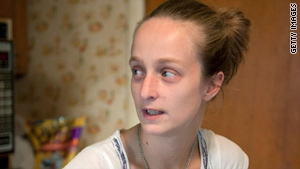 Kristi Hannah says her boyfriend first complained to her of harassment last summer.

Read more about the shooting from CNN affiliates WFSB and WTNH.

(CNN) -- The president of a Connecticut beverage distributor said Thursday a man who went on a shooting rampage this week never filed a claim alleging racial discrimination.

The girlfriend of Omar Thornton, who killed eight people and then himself, told CNN that he was being racially harassed at work.

But Ross Hollander, whose family owns Hartford Distributors, said there were no grievances filed with the company or Thornton's union.

"I can state to you unequivocally no racism claim was ever alleged," Hollander said at a news conference. "Nevertheless, these ugly allegations have been raised and the company will cooperate with any investigation."

Hannah said her mother told Thornton to take pictures of the alleged harassment with his cell phone. He took two pictures in the men's bathroom at work, she said. She described one as his name written on a cartoon, and the other as a drawing of a hangman with a noose around its neck. Connecticut state police have the phone.

Hannah's mother, Joanne Hannah, said she had heard of the cell phone photos. She said Thornton heard a co-worker say he "wanted that n****r out of there." She said Thornton told his girlfriend he had reported harassment to a company supervisor and a union representative, but nothing was done about it.

"There is nothing on record of any complaints from Omar, and there had been no disciplinary actions with him prior to this," said Chris Roos, secretary and treasurer of Teamsters Local 1035.

Manchester, Connecticut, police have said they have found no evidence of racial discrimination.

Thornton's mother told CNN affiliate WFSB that he called her shortly after 7 a.m. Tuesday. He said he had just shot several people and planned to kill himself. She said she pleaded with him for 10 minutes not to do it.

"He said, 'I killed the five racists that was there bothering me,'" Thornton's uncle, Will Holliday, told WFSB. "He said, 'That's it. The cops are going to come in, so I'm going to take care of it myself.'"

Hollander said Thornton "was embraced as a member of our team."

Authorities said Thornton, 34, resigned under pressure Tuesday after he was accused of stealing alcoholic beverages while on his driving route.

An investigation found Thornton was stealing and selling goods to others, Hollander said.

As he left that meeting, escorted by two people, Thornton said he wanted a drink of water and went into the kitchen area, Manchester Police Lt. Chris Davis said. Police believe he had brought two 9mm handguns to the building in a lunch box. In the kitchen, he pulled out the guns and shot his two escorts.

Thornton then "went through the whole building in a very short amount of time" as workers cowered under desks and in "nooks and crannies" and 911 calls poured in, Davis said.

"It's probably likely that he was targeting some individuals," he said. Thornton passed people without shooting them, he said. He would not say whether anyone was shot in the parking lot, but said Thornton shot through a glass door to re-enter the building.

The first 911 call came in at 7:26 a.m., Davis said, and the first officers arrived within three minutes. A five-man team was sent into the building to search for the suspect within 10 minutes, he said. Thornton's body was found in a corner office area of the building by 8:15 a.m.

Steven Hollander, 50, of South Windsor was treated and released from Hartford Hospital. Jerome Rosenstein, 77, of West Hartford, Connecticut, was in serious condition Wednesday.

Cirigliano was the shop steward for the Teamsters union and its president, Roos said.

Thornton left no notes behind and made no comments to relatives about his plans, Davis said. But the fact that he brought the guns to the building indicates the shootings were "obviously something he was thinking about doing."

Thornton had six guns registered to him, and police were attempting to account for them all, Davis said. Authorities believe the guns used in the shootings were bought at a gun dealership in East Windsor, Connecticut.

CNN's Raelyn Johnson and Adam Reiss contributed to this report.