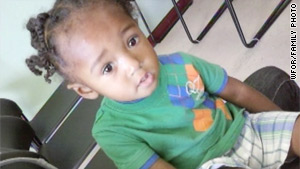 Police have arrested his father in the beating of 2-year-old Willy Brown.

Miami, Florida (CNN) -- The father of a 2-year-old Florida boy has admitted to the near-fatal beating of his son while teaching the child how to box, officials said Wednesday.

Lee Willie Dejesus, 23, of Homestead was arrested Tuesday and charged with aggravated child abuse and child neglect, according to the criminal complaint against him.

Miami-Dade police said the incident occurred Monday night when Dejesus was watching the child while his mother was at work. Dejesus told police that he put on boxing gloves and struck the child about 15 times on his face, head, torso and shoulders over a period of 15 minutes, punching him so hard at one point that the boy fell off the bed and struck his head on the tile floor.

The child was rushed to Children's Hospital where he underwent surgery for bleeding on the brain.

The boy -- identified by CNN affiliate WSVN as Willy Brown -- was on life support Wednesday and not expected to recover from his injuries, said Ed Griffith, spokesman for the Miami-Dade state attorney's office.

Griffith said the boy "may be brain dead," and the attorney's office expects to file first-degree murder charges against Dejesus as early as Wednesday night or Thursday.

The complaint alleges that Dejesus waited to call for medical help for as long as an hour after the boy became unresponsive. He eventually called 911 after the boy's lips became blue, according to the complaint.

Dejesus initially told police that the boy was beaten by a babysitter before admitting he did the beating, the complaint says.

He is being held at a pretrial booking facility on $50,000 bond on the aggravated abuse charge and $7,500 on the child neglect charge, jail records show.