Jurors done for the day in Blagojevich trial 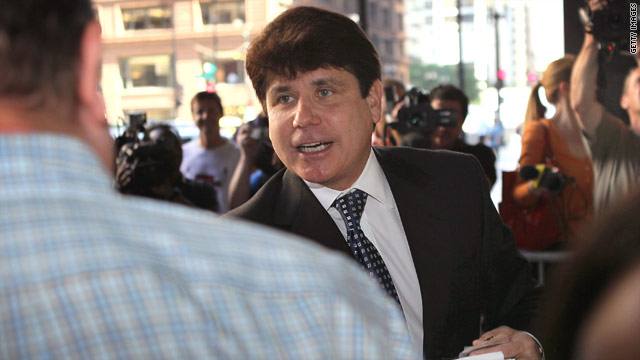 Jurors will return Tuesday morning to continue their work.

Testimony wrapped up last week and deliberations began Wednesday. Blagojevich said that after listening to his attorneys' advice, he decided not to take the stand in his own defense.

While awaiting trial, the ousted governor protested his innocence in interviews and on Twitter, as well as during his appearances on the "Celebrity Apprentice" reality show.

Blagojevich faces 24 counts including racketeering, wire fraud, attempted extortion and bribery. The two-term Democrat was removed from office in January 2009 amid accusations that he attempted to sell the U.S. Senate seat that had been occupied by Barack Obama before he became president.

In one conversation recorded by federal agents, he told an aide, "I've got this thing, and it's [expletive] golden. I'm just not giving it up for [expletive] nothing."

The former governor's brother, Robert Blagojevich, testified Tuesday that the governor was "trying to politically work something to his benefit" in handling the appointment -- but was thinking in terms of political horse-trading, not corruption.

Video: Blagojevich: It's in the jury's hands
RELATED TOPICS

"It didn't seem out of the ordinary, because Obama was taking a lot of people from Illinois with him to D.C.," said Robert Blagojevich, who raised money for his brother. He said the governor "was interested in the idea of being the head of Health and Human Services."

Robert Blagojevich is himself charged with wire fraud, extortion conspiracy, attempted extortion and bribery conspiracy and is on trial with his brother. One count of wire fraud against him was thrown out Wednesday before jury instructions began.

Prosecutors argued that Rod Blagojevich and his inner circle engaged in a near-constant conspiracy of extortion and kickbacks after his 2002 election.