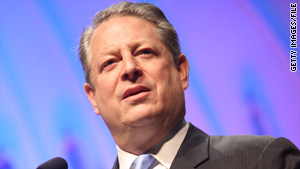 (CNN) -- Former Vice President Al Gore will not face prosecution on an allegation of sexual assault from 2006.

The allegation, brought forth by Molly Hagerty, claims Gore sexually abused her during a professional massage at the Hotel Lucia in Portland on October 24, 2006.

CNN policy is to not name the alleged victim in a sexual abuse case, unless the person has come forward publicly to the media. Hagerty told her story to the National Enquirer.

The Portland Police Bureau did not recommend prosecution "due to a lack of credible evidence," according to the Multnomah County district attorney's office.

"After evaluating the materials submitted by PPB I have concluded that I agree with the assessment that a sustainable criminal case does not exist," Senior Deputy District Attorney Don Rees wrote in a memo Friday. "Ms. Hagerty's detailed statement ... is insufficient to support a criminal charge given other contradictory evidence, conflicting witness statements, credibility issues, lack of forensic evidence and denials by Mr. Gore."

Gore's office in Nashville, Tennessee, released a statement saying the former vice president was pleased with the finding.

"Mr. Gore unequivocally and emphatically denied this accusation when he first learned of its existence three years ago," the statement reads. "He respects and appreciates the thorough and professional work of the Portland authorities and is pleased that this matter has now been resolved."

An attorney for Hagerty did not immediately return a call for comment.

According to the district attorney's office, Portland police first became aware of the allegations in December 2006, when Hagerty's attorney said his client had been subjected to "unwanted sexual contact" by Gore. After a series of canceled meetings with investigators, Hagerty's attorney told police the matter would be handled strictly as a civil case and no police complaint would be filed.

After Hagerty's allegations were published in the National Enquirer this summer, Portland police opened a full investigation, Rees wrote. Portland police submitted their findings to the district attorney's office on Tuesday and did not recommend prosecution.

The district attorney's office noted several deficiencies in the case:

"Ms. Hagerty, who has red hair, states she called Mr. Gore immediately following the alleged incident and told him to 'dream of redheaded women' seemingly in contradiction to her assertions that she was terrified of Mr. Gore," Rees wrote.

The DA's office also said Hagerty did not provide medical records she claimed were related to the case, despite repeated requests. Rees also wrote that Hagerty failed a polygraph examination and was apparently paid by the National Enquirer for her story.