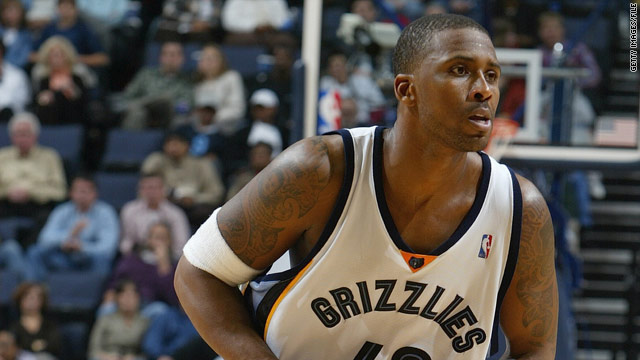 Lorenzen Wright played for the Memphis Grizzlies in 2004. His death has been ruled a homicide by gunshot.
STORY HIGHLIGHTS

(CNN) -- A body found in southeast Memphis, Tennessee, on Wednesday has been identified as that of former professional basketball player Lorenzen Wright, Memphis police said.

The cause of death has been ruled as "homicide by gunshot wound," police said Thursday in a news release, adding that the Shelby County medical examiner used dental records to confirm Wright's identity.

"Investigators continue to work around the clock to bring justice to Mr. Wright and his family," the police department said in a statement.

Before that confirmation, Wright's family had already said that they were mourning his loss.

Wright's cousin, Camella Logan, had released a statement to the Atlanta Journal-Constitution newspaper saying, "We appreciate your thoughts, prayers and condolences as they are comforting at this very difficult time."

Wright, who has a home in Atlanta, was reported missing on July 22. He had been visiting with his former wife and their children in Collierville, near Memphis, investigators said.

Wright was last seen at his former wife's home shortly before midnight on July 18, and a 911 call was placed from his phone in the early hours of July 19, police said.

His body was found on Wednesday by Shelby County Emergency Services Search and Rescue, police said.

Dewayne Benton, a Christian radio personality in Memphis, said he left work early to investigate reports his station received about the body.

"Lorenzen Wright had a lot of financial problems ... but this was just horrible," said Benton. "He was one of the favorite sons of Memphis," he added.

The 6-foot-11-inch Wright was a high school basketball star in Memphis, and he played professionally for the NBA's Memphis Grizzlies from 2001 through 2006.

"We are deeply saddened by the tragic death of Lorenzen Wright," the team's majority owner, Michael Heisley, said in a statement on the Grizzlies' website. "We lost a member of the Grizzlies family."

During his 13-year professional basketball career Wright also played with the Los Angeles Clippers, Sacramento Kings and most recently with the Cleveland Cavaliers.

Former Hawks coach Lenny Wilkens said, "Lorenzen was a real congenial young man who played with a lot of enthusiasm. This is certainly a huge loss for his family and friends."

"Our thoughts and prayers are with [his family] during this difficult time," said Hawks General Manager Rick Sund in a press statement released Thursday by the NBA team.