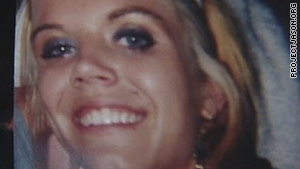 Brittney Kustes, 19, was last seen July 17 at her grandparents' home near Louisville, Kentucky,

(CNN) -- A 19-year-old Kentucky woman who has been missing for more than a week is believed to be with a registered sex offender who has a history of kidnapping and unlawful confinement, authorities said Tuesday.

Brittney Kustes was last seen July 17 at her grandparents' home in Brooks, just south of Louisville, according to Detective Scott McGaha of the Bullitt County Sheriff's Office.

Witnesses told police that sex offender Roy Vernon Elwell, 34, was seen driving up and down the street where Kustes' grandparents live on the day she disappeared.

"Shortly after, she was gone," McGaha told CNN.

Since her disappearance, multiple people, including friends of Elwell's, have reported seeing the pair in Louisville and the surrounding areas.

"We think they're staying close because Elwell has contacts here" and a built-in support system, McGaha said.

Kustes' mother says her daughter has a history with Elwell.

"This guy came into my daughter's life with drugs," Laurie Kustes told CNN affiliate WHAS. She said the last time Elwell was with her daughter, Brittney returned home addicted to methamphetamine, a drug habit she had recently kicked.

McGaha, who knows Kustes personally, said he ran into the teen shortly before her disappearance, and she told him that she cleaned up her life.

"She looked really good," he said.

Her mother echoed those words, telling WHAS, "She was doing great. We talked every day. There was no problems for her to take off and leave. She hated this guy, actually."

McGaha indicated that Kustes appears to be in Elwell's custody against her will.

"What I believe from the information that we're getting is that drugs are being given to her," he said.

"There is no way she left with him intending not to come back," she said.

Kustes told "Issues" that people who have apparently seen the pair have told police that her daughter "has tried to get away from him (Elwell)."

"She's tried to use her cell phone and he's in control of everything," Kustes said.

McGaha said that Elwell knows police want to speak with him about Kustes. Friends of Elwell's have told police that he laughs off requests to come in to the sheriff's office, according to McGaha.

However, McGaha told "Issues" that "the tips are getting stronger ... and hopefully we're going to find them soon."

Meanwhile, Elwell has been found to be noncompliant with the laws of the state's sex offender registry as he continues to evade police. The Class D felony carries a penalty of up to five years in prison, McGaha said.