Texans wonder if they executed an innocent man 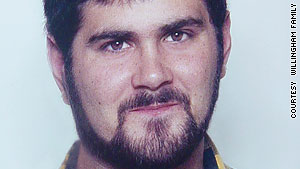 (CNN) -- A Texas state board is set Friday to revisit questions surrounding a controversial 2004 execution, with supporters of the man's family warning the panel is trying to bury its own critical review of the case.

Cameron Todd Willingham was executed in 2004 for a fire that killed his three daughters. Prosecutors argued that Willingham deliberately set the 1991 blaze -- but three reviews of the evidence by outside experts have found the fire should not have been ruled arson.

The last of those reports was ordered by the Texas Forensic Sciences Commission, which has been looking into Willingham's execution since 2008. But a September 2009 shake-up by Texas Gov. Rick Perry has kept that panel from reviewing the report, and the commission's new chairman has ordered a review of its operating rules. Critics say that may kill the probe.

"They are attempting permanently to keep the investigation from continuing and moving on, and I do believe it's because they don't like the direction the evidence is leading," Willingham's cousin, Pat Cox, said Thursday.

Thursday, he told CNN that concerns of Willingham's supporters were based on "a lot of misinformation."

The panel meets again Friday in Houston, and one of the items on its agenda is a legal opinion arguing that the panel has "relatively narrow investigative jurisdiction." The unsigned memorandum argues that the commission's mandate covers only cases on which a state-accredited forensic laboratory worked.

But because Texas started accrediting crime labs in 2003, Cox and others who have backed the family say that would mean cases such as Willingham's and that of another inmate, Ernest Willis, would be dropped. State Sen. Rodney Ellis, who pushed for the commission's creation, calls the opinion flawed.

The Forensic Sciences Commission "was operating within the language and intent of the law when it determined that it had jurisdiction to investigate the case the first time in August 2008," Ellis said in a written statement to CNN. "Frankly, I am surprised that the commission is even questioning whether or not it has jurisdiction, since it unanimously decided -- with the attorney general's representative in the room -- to review the cases over two years ago."

Bradley was named the panel's chairman two days before the Forensic Sciences Commission was to hear from Craig Beyler, a Maryland-based fire science expert. Beyler concluded the arson finding at the heart of the Willingham case "could not be sustained," either by current standards or those in place at the time.

Perry, who signed off on Willingham's execution, is up for re-election in November, and his critics have accused him of trying to short-circuit that review. Perry has said he remains confident of the condemned man's guilt, and police in the town of Corsicana, where the fire occurred, say other evidence beyond the arson testimony Beyler criticized supports the prosecution.