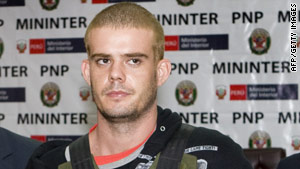 (CNN) -- The attorney who represented Joran van der Sloot during his confession in the case of the killing of a Peruvian woman says that van der Sloot hired her to be his attorney, contradicting a claim he makes in a pending lawsuit.

Van der Sloot, currently in a Peruvian prison pending an appeal on a motion that his incarceration and confession were illegal, sued attorney Luz Marina Romero Chinchay earlier this month. The Dutch citizen claims that Romero was imposed on him and that she became involved because she was in a relationship with a police officer, according to his current attorney, Maximo Altez.

In an exclusive interview with HLN and "In Session," Romero refutes the allegations.

Contrary to the accusations in the lawsuit, Romero said she became involved with van der Sloot after learning that he refused a state-appointed attorney and requested a private attorney.

Van der Sloot wanted to talk to her about the case, she said, but felt uncomfortable with the others in the room -- the prosecutor, a police officer and a translator.

After the others left, the two reached a verbal agreement that she would represent him. Romero remembers asking him about payment. He replied that his mother would pay his legal fees. Then, the others returned to the room and he gave his confession to authorities.

Now, van der Sloot alleges that he never agreed to have Romero as his attorney.

Another contradiction that Romero brought forward involves van der Sloot's knowledge of Spanish. According to the motion to dismiss his confession as illegal, van der Sloot alleges that he didn't understand Spanish enough to know what he was being told to sign.

Romero said their conversation was in perfect Spanish.

According to Romero, van der Sloot was calm during his statement and afterwards spoke with his mother on the phone. Her advice, Romero said, was her son not make any statements or sign anything. But it was too late.

Van der Sloot also told Romero that he was interested in talking about the case of missing Alabama teen Natalee Holloway in Aruba, where he is a suspect, because he thought it might get him extradited to Aruba.

Referring to his new legal strategy, Romero said, "I think every attorney does his work differently, they have their own professional ethic. I respect this professional (Altez) but his actions point to (wanting) to nullify the preliminary investigation. But like I said he had all the guarantees of the due process."

She also questioned the truthfulness of van der Sloot. For instance, when he signed some documents after talking to his mother, Romero noticed that he signed very differently than what he signed on the police statement, she said.

"I told him, 'you signed differently' and he winked his eye and made a silence signal with his hands," Romero said.

She added, "God will clarify everything and I will rest at peace that my innocence in respect to the charges that this man has against me will be made public -- saying that I was working with authorities to lie to this Dutchman -- which is not true."


In Session's Mayra Cuevas contributed to this report.