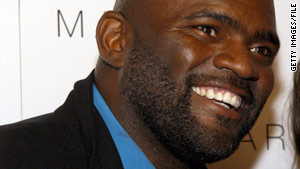 Lawrence Taylor is accused of having sex with a 16-year-old prostitute; he has pleaded not guilty.
STORY HIGHLIGHTS
RELATED TOPICS

Taylor, 51, was arrested in a Ramapo, New York, Holiday Inn room on May 6, a few hours after the alleged rape took place, authorities said at the time. Ramapo is about 30 miles northwest of New York City.

Ramapo Town Supervisor Christopher St. Lawrence and Police Chief Peter Brower told reporters after the incident that the alleged victim was a runaway from the Bronx and had been brought to Ramapo by a pimp.

The girl texted an uncle after she returned to New York City the next day, and the uncle notified the New York City police, prompting the arrest of Taylor and the alleged pimp, St. Lawrence said.

Taylor was cooperative with authorities, he said.

Taylor's attorney, Arthur Aidala, said at an earlier bail hearing: "My client did not have sex with anybody. Period. Lawrence Taylor did not rape anybody."

Aidala said that "no violence, no force, no threat, no weapons" were involved in the case. He noted the rape charge against Taylor was for consensual sex with a minor and said Taylor denied it.

Taylor was a 10-time all-pro linebacker for the New York Giants from 1981 to 1993 after earning All-American honors at the University of North Carolina. He played on two Super Bowl champion teams and was inducted into the Pro Football Hall of Fame, which noted that he "redefined the way the outside linebacker position was played."

However, Taylor was twice suspended by the National Football League for substance abuse and battled a cocaine addiction long after retirement, resulting in several arrests and a downward spiral that he chronicled in a 2003 autobiography.

After kicking drugs, he worked as a sports commentator and appeared as a contestant on ABC's "Dancing With the Stars" in 2009.