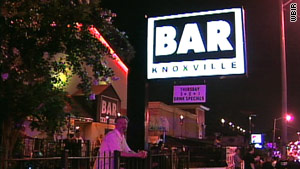 Police say the fight was at Bar Knoxville, a popular destination for University of Tennessee athletes.
STORY HIGHLIGHTS

(CNN) -- University of Tennessee head football coach Derek Dooley dismissed one player and suspended two others Friday following a bar fight that sent an off-duty Knoxville police officer who tried to intervene to the hospital.

Dooley booted Darren Myles of Atlanta, who is accused of assaulting a University of Tennessee officer who rushed to the scene where the Knoxville officer was knocked unconscious.

Dooley also indefinitely suspended Marlon Walls, a defensive tackle from Olive Branch, Mississippi, and linebacker Greg King of Memphis, Tennessee. Their role in the incident was not known late Friday.

"It is a privilege, not a right, to be a member of the University of Tennessee football team," Dooley said in a statement. "The most important responsibility of that privilege is to properly represent this institution and our supporters on and off the field.

"I am disappointed and in many ways embarrassed by the poor judgment displayed on many fronts by several members of our football team last night," Dooley said.

Several people, including other UT football players, were being questioned by police and at least one -- Darick Rogers, a highly sought-after high school football recruit from Calhoun, Georgia -- has been charged with disorderly conduct and resisting arrest, police spokesman Darrell DeBusk said.

The fight broke out at Bar Knoxville -- a popular destination for University of Tennessee athletes -- shortly before 2 a.m. Friday, DeBusk said.

Robert Capouellez, a Knoxville police officer, was lying on the ground unconscious when emergency officials arrived on the scene, DeBusk said. Capouellez is reported in stable condition, officials said.

Gary Russell, who was assaulted by several people inside the bar and also was transported to University Medical Center with multiple injuries, has been discharged, a hospital official told CNN.

"It was total chaos," Morton said.

Witnesses told police the fight started inside, but bar employees pushed those involved outside onto the sidewalk. That's when Capouellez intervened. According to witnesses, the officer was hit in the head and kicked several times while lying unconscious on the ground.

A total of six individuals -- who DeBusk said appear to be associated with the University's football program -- have been identified as potential suspects. They were located and detained for questioning, he said, and police want to question three or four others who may have been involved in the fight.

Officer Brian Greenlee of UT Police rushed to the scene and ordered the group to stop. According to an affidavit, Greenlee made contact with Myles, a defensive back. Myles fled, was ordered to stop and struck Greenlee's left eye with his elbow when the officer tried to place a restraint hold on him, according to the police report. Myles ran off and was later found hiding in bushes, police said.

Greenlee did not require medical treatment, said Amy Blakely, assistant director of Media and Internal Relations. The case was brought by UT Police because its officer was assaulted, she said.

"We always give VIP status to the football players," said Morton. "It won't be happening anymore."

"Although we are still gathering all the facts and some legal proceedings will follow, we have taken some initial levels of discipline resulting from my conversations with the student-athletes who were present," Dooley said in the statement.

Dooley also answered questions at an evening press conference, including one about Myles' dismissal.

"It hurts our team," said Dooley, according to CNN affiliate WBIR. "A lot of people get hurt when you do things that aren't right. It's not just Darren who's hurt. I had to sit there and watch his mother cry, who's hurt. And his family is hurt, I know his father is hurt. And I know his home town is probably disappointed."

CNN's Cheryl Castro and David Close contributed to this report.