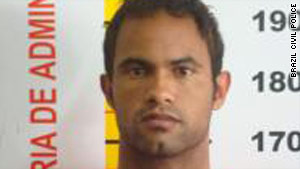 (CNN) -- A Brazilian goal keeper, whom police named a prime suspect in the disappearance and murder of a woman said to be his former girlfriend, has refused to answer questions on his alleged involvement, police said Friday.

Investigators in the state of Minas Gerais said Bruno Fernandes Das Dores de Souza, who played for Flamengo football club, orchestrated the murder of Eliza Samudio, 25. Her body remains missing a month after her disappearance.

During the alleged confession, the cousin details how he worked with two of Bruno's friends -- Luiz Henrique Ferreira Romao, nicknamed "Spaghetti," and former policeman Marcos Aparecido dos Santos, known as "Bola." Both men have been arrested in connection with the investigation.

The woman's body was taken to an undisclosed location where her remains were fed to several Rottweilers, police said.

Souza's former attorney, Michel Assef Filho, told reporters Thursday that "Bruno has only said that he has no knowledge of the facts, he is astonished and scared by his cousin's testimony and that's it."

Filho stopped representing Souza when the Flamengo Club suspended Souza's contract, as the attorney works on behalf of the club.

All three are being held at a high-security prison in Contagem, Minas Gerais, after they were escorted from Rio de Janeiro in a police-chartered jet.

Souza and Romao were taken to the Minais Gerais police department for questioning Friday morning. Both refused to answer questions, a police spokesman told CNN.

So far, seven people have been arrested in connection with the case, including Souza's wife, Dayane.

The football star was last seen with Samudio in June as they headed for his country home in the state of Minas Gerais. Officials in Minas Gerais are still searching for Samudio's body.

On Thursday, the Flamengo Club stated it "is not involved in any way" with the case. The club said it is suspending Souza's contract "until all the facts" are known.