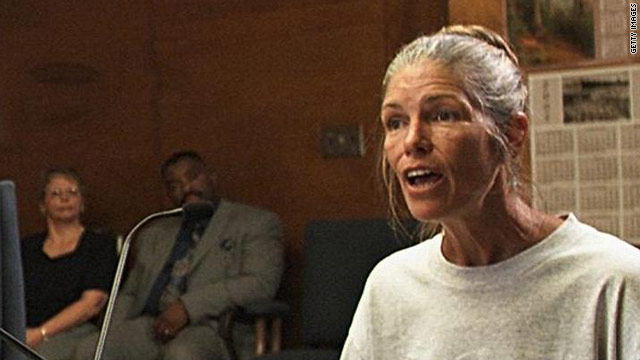 Leslie Van Houten, shown at a parole hearing in 2002, went before California's parole board for the 19th time on Tuesday.
STORY HIGHLIGHTS

The board found that Van Houten "still poses a risk to society," spokesman Luis Patino said. The decision marks the 19th time that she has been denied parole, and she won't be eligible again until 2013, Patino said.

"The crime itself was absolutely horrendous -- the brutal slaughter of two individuals in their home, in a cruel and very horrifying manner," said Sequeira. "It is our position that she never really has fully accepted responsibility for her crimes."

Known as "Lulu" while one of notorious spree killer Charles Manson's followers, Van Houten helped hold down Rosemary LaBianca while other Manson family members stabbed her and her husband, Leno LaBianca in 1969. She was 19 at the time.

She has been imprisoned at the California Institution for Women at Frontera for more than three decades, following her final conviction on first-degree murder charges in 1978 and a sentence of life in prison.

Prison spokesman Lt. Robert Patterson told CNN in 2009 that Van Houten is a model inmate involved in prison programs and a mentor to other inmates in the facility's college program. And lawyer Brandie Devall, who has been representing Van Houten for just under a year, said Tuesday before the hearing that the "fact that Leslie has had good reports since 1978" should help persuade the parole board to release her.

Van Houten, Manson, Pat Krenwinkel and Susan Atkins were found guilty of murder and conspiracy to commit murder and sentenced to death in 1971. Their sentences were commuted to life in prison after the U.S. Supreme Court struck down death penalty laws in 1972 and established a four-year moratorium on executions.

Van Houten's original conviction was overturned in 1976 on grounds that a judge erred in not granting a mistrial after her attorney, Ronald Hughes, disappeared and later was found dead. The jury deadlocked in her first retrial, and she was released on bond for a few months. But in her third trial, in 1978, she was convicted of first-degree murder.

Ahead of Tuesday's parole board hearing, Devall said she was "excited" about the appearance. She planned to bolster her argument with rulings in two cases from the California Supreme Court since Van Houten's last parole hearing, in 2007. Each case was recently upheld by federal courts.

Devall said during Tuesday's hearing, she planned to cite the case of Sandra Lawrence, a convicted murderer who was released in 2007 after more than 20 years in prison. The California Supreme Court decided that if an eligible parolee has spent enough time on rehabilitation and reform, the panel has the burden of proving that the inmate poses a current threat to public safety and should not base its decision on what happened decades earlier.

In addition, Devall planned to use the case of Richard Shaputis, who was sentenced to 15 years to life following his 1987 conviction for second-degree murder -- and remains behind bars. Devall says in that case, the court found that parole boards should give significant consideration to psychologists' reports regarding whether inmates have demonstrated acceptance of responsibility, insight and understanding of their crimes, as Van Houten has.

"The autopsy reports have shown that it was Tex [Charles "Tex" Watson] that wielded the fatal wounds, but I contributed, and I attempted to hold her down for Pat," she said. "I called to Tex because we couldn't kill her. You know, it's -- morally, I feel as though I did."

And during a 1994 CNN appearance, Van Houten told King the Manson family's lifestyle attracted her.

"I met these people. They said that they came from a commune in L.A. where they lived for the day and for the moment, and it was a lot of the [Timothy] Leary kind of philosophy of 'Be here now.'"

Van Houten called Manson "an opportunist of the cruelest, most vicious kind," but she was quick to emphasize that she accepts blame for her role in the crimes.

CNN's Ashley Hayes and Matt Cherry contributed to this report.