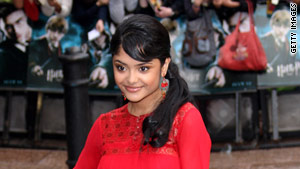 London, England (CNN) -- The father and brother of a Harry Potter actress will appear in court later this month in Manchester, England, on charges of threatening to kill the young star, prosecutors said Friday.

Abdul Azad, 54, and his son Ashraf, 28, are accused of attacking actress Afshan Azad earlier this month because of her relationship with a Hindu man, a spokesman for the Crown Prosecution Service said. The family is Muslim.

The father and brother appeared at Manchester Magistrate's Court on Wednesday and were released on conditional bail, said the spokesman, who could not be named in line with policy.

Bail conditions include a curfew and ban on traveling to London, the Manchester Evening News reported.

Afshan Azad, reported to be 22, has appeared in four Harry Potter films as Padma Patil, a classmate of the boy wizard and twin sister of Parvati Patil.

The alleged attack happened May 21. The father and brother are charged with threatening to kill the actress, and her brother is also charged with assault, the prosecutors' spokesman said.

Afshan Azad had never acted before she was cast in the movies, and admitted she only went to the auditions with her friends "for a bit of fun," the Manchester Evening News reported.