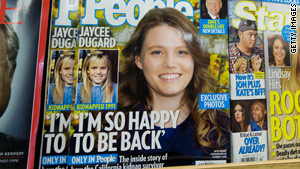 Jaycee Dugard was found in August 2009, living in a shed in the Antioch, California, backyard of Phillip Garrido.

(CNN) -- The California Assembly on Thursday passed a bill appropriating $20 million to kidnapping victim Jaycee Dugard to settle her claims against the state Department of Corrections and Rehabilitation, according to the chief clerk's office.

The bill passed on a 30-1 vote in the Senate and a 62-0 vote in the Assembly, according to CNN affiliate KCRA. Corrections officials entered into the settlement with Dugard, the station said.

Dugard vanished in 1991 at the age of 11. She was found in August 2009, living in a shed in the Antioch, California, backyard of Phillip Garrido, a registered sex offender who had been on parole since January 1988. Investigators say Garrido fathered two children with Dugard during her captivity. He and his wife, Nancy, are charged with 29 felony counts in the case. Both have pleaded not guilty.

In a report issued in November, the state inspector general's office found the state Department of Corrections and Rehabilitation failed to properly keep tabs on Garrido or properly supervise the officers assigned to his case.

"While it is true that Garrido's California parole was never officially violated, our review shows that Garrido committed numerous parole violations and that the department failed to properly supervise Garrido and missed numerous opportunities to discover his victims," the report said.

Parole officers failed to investigate utility wires running from Garrido's house toward the shed where Dugard was held, to check out the presence of a 12-year-old girl during a visit or to act on information the report said "clearly" showed Garrido had violated the terms of his release, the report said.

Dugard, who is now 30, her mother and her daughters had filed a claim saying state corrections officials failed to do their jobs, seeking psychological, physical and emotional damages, KCRA said.

The settlement process was "pretty much unprecedented," said Jeff Long, spokesman for Assemblyman Felipe Fuentes, who sponsored the bill.

Officials thought the state might have a case if it fought Dugard's claim, but it wasn't worth the case going to a jury, Long said.

Because the constitutional deadline for an approved state budget has passed and California is in a new fiscal year without a budget, no appropriations can be made without Gov. Arnold Schwarzenegger's consent. Schwarzenegger has to request the bill be moved to his desk to sign it, Long said.

Garrido was paroled in August 1988 after serving 11 years of a federal kidnapping sentence. He also served a five-year term in Nevada for rape charges.

The November report from California Inspector-General David Shaw was limited to reviewing the actions of state parole officers in charge of monitoring Garrido from June 1999 until Dugard and her children were discovered. But Garrido was under the supervision of federal parole officers when authorities say he kidnapped Dugard in 1991, and they also "failed to detect Garrido's criminal conduct and his victims," the report says.

Garrido was only "properly supervised" for 12 out of the 123 months he was under California's supervision, "a failure rate of about 90 percent," Shaw told reporters in November.

CNN's Ashley Hayes and Rachel Brown contributed to this report.