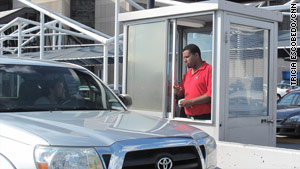 Parking lot attendants are being trained to spot suspicious activity as part of a new federally funded program.

Atlanta, Georgia (CNN) -- The next time you pull into a parking garage and the attendant gives you the once-over, he or she may be taking note of more than just the shiny rear spoiler on your new car.

As part of a new government initiative, parking lot attendants and other transportation workers are being trained as the next line of defense in the fight against terrorism.

The First Observer program was introduced to parking lot professionals at a Las Vegas, Nevada, convention in May, days after a vendor in New York's Times Square spotted a suspicious vehicle and helped thwart what could have been a deadly terrorist attack.

The Times Square incident highlighted the need for ordinary citizens to be trained to become extra eyes and ears of law enforcement, according to officials involved in the program.

"No matter how banal it seems, if something seems different to you or suspicious, we want you to report it," said Jeff Beatty, a former CIA and FBI agent.

Beatty led the First Observer program's pilot training session Monday in Atlanta, Georgia. He and a team of Transportation Security Administration officials trained some 60 parking lot officials and representatives on how to spot suspicious vehicles carrying hazardous materials or other activity that may signal the planning phases of a terrorist attack.

"In New York City, a T-shirt vendor saw an abandoned vehicle that looked suspicious. He called the police, and they moved in quickly," Beatty said. "Even in the eleventh hour we have an opportunity to make a difference."

The training is part of a $15.5 million program funded by the Federal Emergency Management Agency and administered by the Transportation Security Administration.

Under the program, transportation workers -- including parking lot employees and truck and school bus drivers -- are trained to be on the lookout for people taking photos or sketches of supportive beams in parking garages, people loading vehicles with numerous propane fuel tanks, and foul odors such as diesel fuel coming from a nondiesel-burning van -- which could signal an ammonium nitrate bomb.

"We are not trying to turn you into Jack Bauer," Beatty said at the Atlanta training session, referring to Kiefer Sutherland's role as a counterterrorism agent in the TV series "24."

We are not trying to turn you into Jack Bauer.
--First Observer program trainer Jeff Beatty
RELATED TOPICS

"We like who you are as parking lot professionals. We want you to 'observe, assess and report.' "

Organizers plan to provide similar training sessions nationwide over a three-year period. For parking lot employees who cannot attend the seminars, First Observer encourages individuals to go to its website where they can take an online training course.

If citizens would have reported red flags such as Timothy McVeigh's improperly parked getaway car ahead of the 1995 Oklahoma City bombing that killed 168 people, the attack may have never occurred, Beatty said.

Witnesses who see red flags and don't report them may live with guilt, he said.

"Shame on us if we don't prevent this from happening again," Beatty said.

Vehicles packed with explosives can easily elude authorities, he said. That's why people such as parking lot attendants, who are more familiar with everyday activities, can be a great asset to counterterrorism operations.

Still in its infancy, the First Observer program has resulted in around 80 calls that have provided valuable information to law enforcement, Beatty said.

Organizers said the program should not replace the 911 emergency system but enhance it.

"It's not illegal for someone to take pictures of an underside of a bridge or of a chlorine tanker," Beatty said. "Is it suspicious? Yes."