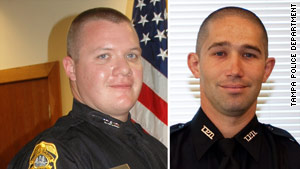 Officers David Curtis, left, and Jeffrey Kocab were both 31, according to the Tampa Police Department.
STORY HIGHLIGHTS

(CNN) -- A woman sought for questioning in the deaths of two Tampa, Florida, police officers was taken into custody Tuesday, and detectives recovered a vehicle they were looking for in the case, authorities said.

Uniformed and undercover officers, air support and search dogs were being used in a manhunt for another person in connection with the officers' slayings. Both officers were shot during an early morning traffic stop.

Florida authorities issued an arrest warrant for Dontae Rashawn Morris in connection with the killings, police said. A reward of $75,000 was being offered for information leading to an arrest, police said.

Officer Jeffrey Kocab was pronounced dead at a Tampa hospital after the incident about 2:15 a.m. Tuesday. Officer David Curtis was pronounced dead later, although police said he would remain on life support for a few hours, as his family had chosen to harvest his organs. Both officers were 31, according to the department.

Kocab's wife is due to give birth next week, while Curtis leaves behind his wife and four sons, ages 9, 6, 5 and 8 months.

"This has been a terribly tragic day in the city of Tampa," Mayor Pam Iorio told HLN's "Prime News."

Iorio said she got a phone call from the police chief at three in the morning about the shooting, and went straight to the hospital.

"We have a great deal of respect and love for our law enforcement officers in Tampa and losing two has just been a terrible tragedy and has affected everyone," she said.

Curtis had pulled over a vehicle and found its male passenger had an outstanding warrant for "minor violations," Tampa Police Chief Jane Castor told reporters Tuesday. Kocab responded to back Curtis up, and "as they put their hands on the suspect, the suspect spun around, pulled a firearm and shot both police officers," she said.

Curtis pulled the car over because it had no license plate, authorities said in a statement. "Officer Curtis determined the passenger was wanted on a worthless check warrant" out of Jacksonville, Florida, the statement said. He called for backup and Kocab arrived. Both officers approached the vehicle on the passenger side.

Officers responding to a 9-1-1 call from a witness found both officers on the ground and began cardiopulmonary resuscitation, police said. Both were taken to Tampa General Hospital. Kocab was pronounced dead shortly after arrival, while Curtis was put on life support and later pronounced dead.

"Officer Kocab and Officer Curtis were outstanding. They went above and beyond the call of duty and they leave behind families that are just completely devastated by this," the mayor said.

Tuesday afternoon, police named two people being sought for questioning in the case, saying in a statement that detectives believe they were "at the scene of the shooting." The two were identified as Morris, 24, and Cortnee Nicole Brantly, 22. Authorities later said the woman had been taken into custody.

In remarks to reporters before the woman was located, Castor stopped short of calling the two people "suspects," but said, "both of those individuals should be considered armed and dangerous at this time."

"If you shoot two police officers in cold blood, you've got to be considered very dangerous," the police chief said, "and it's our goal to get them off the street."

Both Curtis and Kocab were shot in the upper body, Castor said. They were shot at close range, she told reporters, and body armor would not have helped them avoid injury.

Authorities set up a perimeter around the shooting scene, which remained Tuesday afternoon as police searched for evidence. Tampa police were working several leads in the city but were also working on a statewide search, officials said.

Kocab had been with Tampa police for 14 months, police said, and moved through the police department's training program at an accelerated pace "because of his outstanding police skills." Castor said he previously was with the Plant City, Florida, police.

Curtis has been with the department for three years and eight months, according to police spokeswoman Laura McElroy. He previously was a jail deputy with the Hillsborough County Sheriff's Office.

Castor described both men as "solid police officers and outstanding individuals" who both worked the midnight shift. Kocab, she said, was "looking forward to being a father," and Curtis was devoted to his wife and sons.

Kocab was "quite a storyteller" and had a strong interest in acting, Officer Jason Ward said at a news conference Tuesday.

"It was a shock. I couldn't believe what I was hearing," Ward said about when he heard the news.

Another officer, Jeremy Larson, said Curtis could be described in one word: dedicated.

"The safety of Tampa residents was the first priority for Officers Kocab and Curtis, and today they selflessly made the ultimate sacrifice to protect their city," the attorney general said. "They will certainly be missed not only by their loved ones, but also by the city they worked to keep safe."

CNN's Maria White and Scott Thompson contributed to this report.