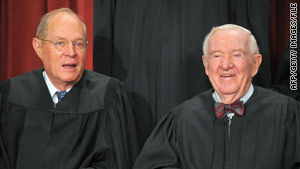 Washington (CNN) -- The Supreme Court closed its term for the summer Monday with tributes to two members of its family.

Justice John Paul Stevens capped his 35-year-career on the high court by emotionally thanking his colleagues. And Justice Ruth Bader Ginsburg was on hand to hear a tribute to her late husband, Martin, who died Sunday of cancer.

The nine justices wrapped up their business before a three-month recess by issuing orders and the court's remaining four opinions. Before gaveling the court to a close after a 70-minute session, Chief Justice John Roberts thanked Stevens for his service.

"Your decision to retire saddens each of us in distinct ways," said Roberts from the bench. "You have enriched us through your inspiring example of public service. The bonds of friendship that we have forged extend beyond our common endeavor."

The 90-year-old Stevens had the last word, telling the packed courtroom, "It has been an honor and a privilege to share custodial responsibility for a great institution with the eight of you and with ten of your predecessors."

You have enriched us through your inspiring example of public service.
--Chief Justice John Roberts
RELATED TOPICS

He appeared emotional in his brief statement, pausing at times. But he smiled broadly at the end.

The court opened its final public session of the term by offering a tribute to Ginsburg's husband. The couple met on a blind date as undergraduates at Cornell University. They celebrated their 56th wedding anniversary last week.

The justice surprised many of her colleagues by appearing in person and offered a strong-voiced oral summary to one of the opinions issued.

She made no mention of her husband's passing.

The court offered no explanation on her decision to appear on the bench or on the private burial for her husband. The Army veteran will be interred at Arlington National Cemetery.