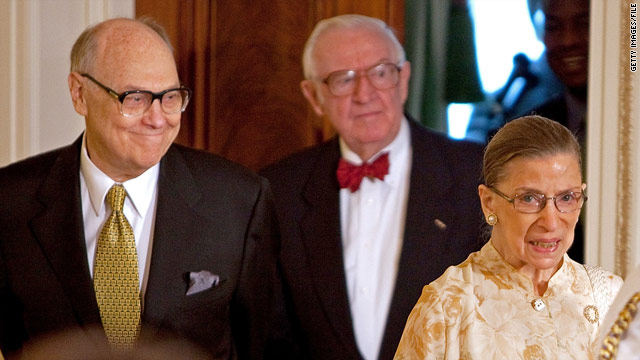 A statement from the Supreme Court said Ginsburg died Sunday at his Washington home, due to complications from metastatic cancer. The court said a private ceremony will be held at Arlington National Cemetery, but no date was given.

Ginsburg, known as Marty to his friends and family, was the outgoing, jovial opposite of his soft-spoken, diminutive wife, but the couple maintained a strong, happy marriage over 56 years.

Their wedding anniversary was four days ago. The Supreme Court will wrap up its work for the term Monday, and recess for the summer. Justice Ginsburg was on the bench as recently as Thursday as rulings were announced.

Until his recent illness, Ginsburg worked as a lawyer at the Washington law firm Fried Frank, and as a professor at Georgetown Law Center.

He was constant presence at his wife's side at many social and court-related events. Ginsburg was known inside the court for cooking meals for the justices, their families, and for his wife's law clerks, a skill he picked up when discovering his wife possessed few culinary talents. That became a running joke in the family, and one which the justice regaled audiences with over the years, somewhat sheepishly.

"Professor Ginsburg is a regular contributor to the lighter side of life at the Supreme Court," said the justice in March 2009. "Mainly he performs in the kitchen, for the quarterly spouses' lunches held at the Court and, occasionally in past years, at a dinner for the entire Court family -- justices, their spouses, and widows of former Court members. In the beginning, when I was the newest justice, my dear husband offered aid in lightening my load."

Ruth Ginsburg, who joined the Supreme Court in 1993, long credited her husband's open-mindedness for the success she has enjoyed in her legal, academic, and judicial career, especially at a time decades ago when women were encouraged to stay home and devote their energies to supporting their spouses.

Martin David Ginsburg was born in 1932 and grew up in Long Island, New York. He met his future wife on a blind date at Cornell University, and they married in 1954. After he served a stint in the military, the couple both attended Harvard Law School. During his third year, Ginsburg developed a rare form of testicular cancer and underwent two surgeries. He credited his recovery in part to wife's ability to juggle caring for him, their young daughter, and their dual legal studies.

He later worked as a lawyer in New York and a professor at Columbia University's law school, where Ruth Ginsburg had transferred and graduated. Unlike her husband, the future justice was unable to find a job at her alma mater or any decent offers at a law firm, so she began teaching at Rutgers University, and developed a national reputation taking on gender discrimination cases.

He was known for quietly helping build and organize political support for his wife's appointments to those top government jobs. The justice has called her husband her "best friend and biggest booster."

"A supportive husband who is willing to share duties and responsibilities is a must for any woman who hopes to combine marriage and a career," she recently told a forum on professional opportunities for female lawyers. "

Through his friendship with billionaire businessman and onetime presidential candidate Ross Perot, a special position -- or "chair" in academic circles -- was created at Georgetown for the study of tax law, and named in Martin Ginsburg's honor.

It was less than successful, however, as the professor himself explained in his professional resume. "In 1986, someone who probably prefers never to be identified endowed a Chair in Taxation in his name at Georgetown," wrote Ginsburg. "No one appears willing to occupy the Ginsburg Chair, and it remains vacant," a fact he always laughed about.

The Ginsburgs had two children, Jane -- a professor at Columbia -- James, an independent record producer in Chicago, and four grandchildren.