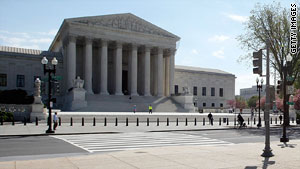 The Supreme Court upheld a state law that allows making public the names of people who signed a petition.
STORY HIGHLIGHTS
RELATED TOPICS

Washington (CNN) -- A state law that would make public the names of people signing a petition for a voter referendum against greater rights for same-sex partners has been upheld by the Supreme Court.

At issue in this free speech and privacy dispute was whether officials in Washington state properly decided there was a "compelling public interest" when opting to release the names of gay rights opponents who voluntarily signed a statewide petition. The court by an 8-1 vote on Thursday decided in favor of the state.

Gov. Christine Gregoire last year signed a bill approved by the legislature affording same-sex couples, as well as domestic partners over the age of 62, the same "rights, responsibilities, and obligations" given married spouses. It is commonly called the "Everything But Marriage" bill.

State law allows such measures to be put to a voter referendum. A group called Protect Marriage Washington, which opposed expanded rights for same-sex couples, was able to gather more than 138,000 supporting signatures, qualifying the question for last November's ballot. Voters, asked in Referendum 71 to approve or reject the law, narrowly approved it, marking the first time a state's voters backed a gay equality measure at the ballot box.

The two sides of the debate now are at odds over whether the identities of the referendum's signers are considered public records.

The high court had debated whether signing a referendum is considered public political speech -- permitting release of the names -- or anonymous speech, allowing greater First Amendment protection to privacy.

This ruling could affect about two dozen states that allow citizens to place an initiative or referendum on the ballot.

Protect Marriage Washington says its backers could be harassed if officials release the names.

James Bopp, the attorney representing gay rights opponents, told the court, "With modern technology, it only takes a few dedicated supporters and a computer who are willing to put this information on the Internet, MapQuest it," which he claimed happened to California residents opposing a gay marriage law. The controversial law's open disclosure provision "encouraged people to harass" those against expanded rights for gays, lesbians, bisexuals, and transgenders.

But Roberts said most such referendums involve more mundane matters like state revenue, property taxes, and public education. "Voters care about such issues, some quite deeply -- but there is no reason to assume that any burdens imposed by disclosure of typical referendum petitions would be remotely like the burdens plaintiffs fear in this case," he wrote.

Justice Samuel Alito agreed the state law in general does not violate the Constitution, but said voters in this specific case and others may still be able to justify non-disclosure if they can rationally prove possible harassment.

Justice Clarence Thomas went further, writing in dissent that the Washington voters had established sufficient grounds to have the law tossed out.

Several local groups in Washington state -- including KnowThyNeighbor.org and WhoSigned.org -- have signaled their intent to place the names on the Internet and make them searchable. Protect Marriage Washington, in its appeal

to the Supreme Court, claimed their opponents have promoted "the goal of encouraging individuals (supporting gay rights) to have 'personal' and 'uncomfortable' conversations with petition signers."

A similar has come up in relation to a pending federal court case in California. A federal judge is considering whether a voter referendum against same-sex marriage is an unconstitutional violation of civil rights.

At issue there is Proposition 8, which California voters approved in November 2008, prompting a constitutional appeal by several same-sex couples. A ruling in that case could come at any time.

Same-sex marriage opponents in California have claimed that wider public exposure of their testimony on the stand could subject them to harassment.

CNN filed a legal brief, along with 21 other news organizations and media rights groups, supporting public disclosure of the voting information in the Washington state appeal.