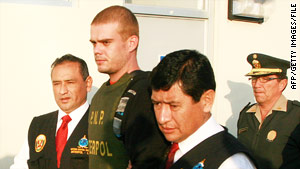 Joran van der Sloot has been charged with murder in the death of 21-year-old Stephany Flores in Peru.
STORY HIGHLIGHTS

Lima, Peru (CNN) -- Police said Thursday that they found skin underneath the fingernails of Stephany Flores, whose body was found June 2 in the hotel room in Lima, Peru, of Joran van der Sloot.

Miguel Canlla Ore, a colonel in the Peruvian National Police and head of homicide, told journalist Victoria Macchi that the amount of skin was small and that laboratory DNA tests that might indicate its provenance had not been completed.

Peruvian authorities have charged the 22-year-old Dutchman with murder in the death of the 21-year-old woman, whom van der Sloot had met while gambling in Lima.

He was also the lead suspect in the 2005 disappearance of Alabama teenager Natalee Holloway in Aruba.

Van der Sloot was arrested twice in connection with Holloway's disappearance in Aruba but was never charged because of a lack of evidence.

Van der Sloot told authorities he attacked Flores on May 30 after she read an e-mail in his computer connected with the Holloway case. After killing Flores, police say, van der Sloot took money and bank cards from her wallet and fled to Chile, where he was arrested on June 3.