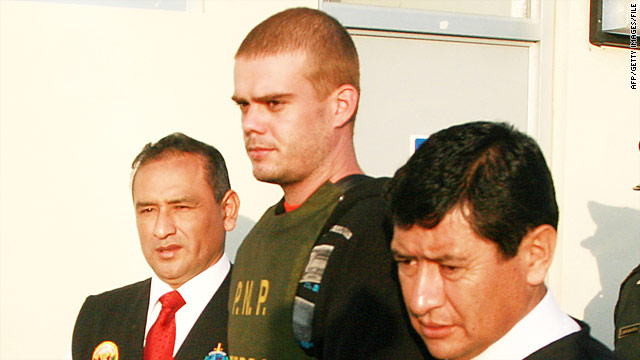 Lima, Peru (CNN) -- Joran van der Sloot has filed a complaint with Peruvian police claiming that his constitutional rights and his right to a defense were violated after his arrest in connection with the killing of a Peruvian woman.

According to a copy of the complaint, obtained by CNN, van der Sloot alleges that his right to due process was denied.

The complaint, given to the Peruvian National Police's internal investigation unit, singles out the department's homicide director, Col. Miguel Angel Canlla Ore, and those who work for him.

Van der Sloot said he has been detained without a judicial order.

"I have been denied my right to a proper defense, by imposing an attorney that seems to be the girlfriend of a cop on duty who works in this police department," the complaint states.

He also alleges that police took his laptop and searched his communications and correspondence without a judicial order.

"I have been imposed an unofficial translator whom has confused me, with the intention of pressuring me to incriminate myself in the homicide investigation," the complaint states.

The document follows a similar complaint that van der Sloot made to a judge earlier this week.

Meanwhile, a judge was expected decide on the legality of van der Sloot's incarceration Wednesday, his lawyer said.

If the ruling is unfavorable, attorney Maximo Altez said he is prepared to appeal to the highest court.

Peruvian authorities have charged van der Sloot with murder in the death of 21-year-old Stephany Flores. He also is the lead suspect in the 2005 disappearance of Alabama teenager Natalee Holloway in Aruba.

A court document obtained by CNN shows Flores had a cranial fracture and other significant injuries to her face and neck and showed signs of asphyxiation. Forensic luminol tests in the hotel room where her body was found showed blood on the floors, hallway and mattress, the document said.

Van der Sloot told authorities he attacked Flores on May 30 after she read an e-mail on his computer connected with the Holloway case. After killing Flores, police say, van der Sloot took money and bank cards from her wallet and fled to Chile, where he was arrested on June 3.