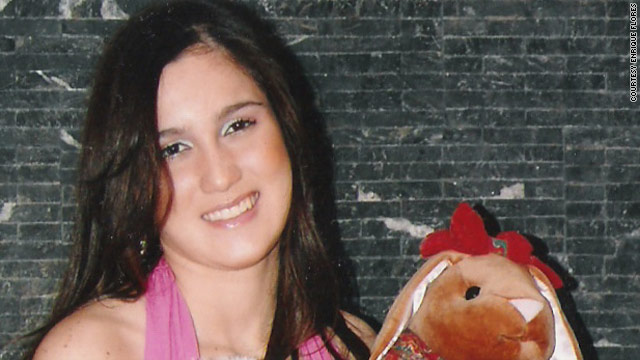 Lima, Peru (CNN) -- The 21-year-old Peruvian woman Joran van der Sloot is accused of killing had a cranial fracture and other significant injuries to her face and neck and showed signs of asphyxiation, a court document obtained by CNN shows.

Forensic luminol tests in the hotel room where her body was found showed blood on the floors, hallway and mattress, the document said.

The body of Stephany Flores was in such a decomposed state that an autopsy was difficult to perform, the document said.

The autopsy revealed Flores had used amphetamines, it said.

Peruvian authorities have charged van der Sloot with murder. He also is the lead suspect in the 2005 disappearance of Alabama teenager Natalee Holloway in Aruba.

Peruvian police said Monday they conducted a psychological evaluation of van der Sloot. The evaluation showed van der Sloot has a low tolerance for frustration and "doesn't value the female role," according to excerpts from the report, which prosecutors gave to a judge.

According to the document, van der Sloot "does not tolerate when someone tries to contradict him. It generates in him a challenging attitude." The report calls him "emotionally immature," which elicits strong changes in behavior that can send him out of control.

"He reflects a certain dominance over the opposite sex. He doesn't value the female role," the document states. It adds, "He presents traits of an anti-social personality" and is "indifferent towards others' well-being."

Also Monday, Van der Sloot told the judge his rights and due process were violated after his arrest, his attorney told CNN.

The judge will decide on the legality of van der Sloot's incarceration by Wednesday, lawyer Maximo Altez said. If the ruling is unfavorable to van der Sloot, Altez said, he is prepared to appeal to the highest court.

While in front of the judge, van der Sloot declined to give a formal statement on the facts of the case, according to the court. The reason he gave was he hopes the statements he allegedly gave to police that led to his imprisonment will be nullified.

A Dutch newspaper article published Monday quotes van der Sloot as saying he was "tricked" into confessing to the murder of Flores.

Peruvian police told him that if he signed the papers they gave him, he would be transferred to the Netherlands, he told De Telegraaf in a jail interview. "In my blind panic I signed everything, but never knew what was written on them," he said.

He reflects a certain dominance over the opposite sex. He doesn't value the female role.
--Joran van der Sloot's psych evaluation

Van der Sloot told authorities he attacked Flores on May 30 after she read an e-mail on his computer connected with the Holloway case. It was five years to the day from Holloway's disappearance. After killing Flores, police say, van der Sloot took money and bank cards from her wallet and fled to Chile, where he was arrested on June 3.