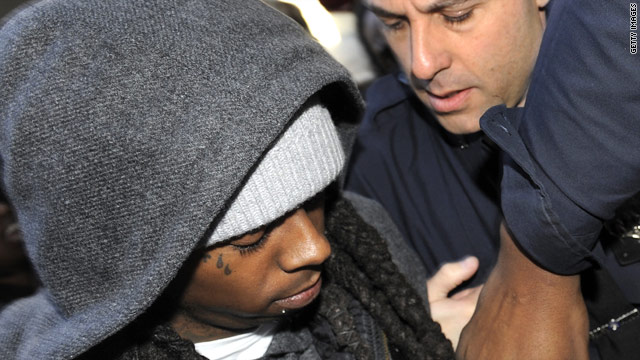 (CNN) -- Rapper Lil' Wayne may avoid jail time on an Arizona drug charge, according to a plea deal that was announced Monday.

The only problem is the rapper is already in jail.

Lil' Wayne is currently serving a year in prison in New York for gun charges. But he appeared in an Arizona court Monday via video.

The rapper, whose legal name is Dwayne Carter, could receive 36 months probation in the plea deal, according to court documents from Yuma County Superior Court in Arizona.

Carter was facing a maximum sentence of three-plus years in prison if convicted in the Arizona case, according to court documents.

The charges stem from a January 2008 bust on his tour bus where the drug ecstasy was allegedly found in his backpack.

The plea deal is a recommendation and needs to be confirmed when Carter goes in front of a judge at a later date.

Lil' Wayne is a multiplatinum-selling and Grammy-winning rap artist. His hits include "The Block is Hot" and "Lollipop." His album "Tha Carter III" was the top selling disc of 2008. His latest album, "Rebirth," was released earlier this year.

The New York charges stem from his arrest in 2007 outside New York City's Beacon Theater. According to police, Carter had a .40-caliber pistol on his tour bus. His attorney said it belonged to someone else.