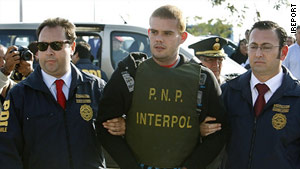 Joran van der Sloot, a suspect in Natalee Holloway's death, is in custody accused of killing a woman in Peru.
STORY HIGHLIGHTS

Police do not want their investigation jeopardized or possible evidence contaminated in the Bubali Bird Sanctuary, a swamp area where Joran once said he dumped Holloway's body, Blanken said. Aruban authorities wish to search a more focused area once they receive more information from van der Sloot and his laptop, which may include files linking him to the Holloway disappearance.

Earlier, Blanken said investigators from Aruba would not be able to question van der Sloot until Peruvian authorities finish their probe of the May 30 slaying of Stephany Flores. The formalities of Peruvian law also will determine the time frame, the prosecutor said.

Aruban and Peruvian authorities agreed to "help each other" in the Flores case.