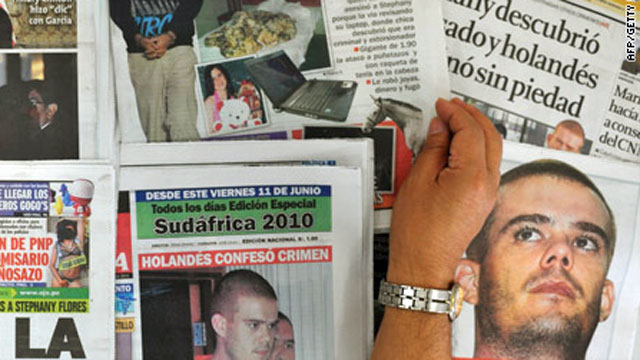 Lima, Peru (CNN) -- Joran van der Sloot told investigators during an interrogation that he knows the location of Natalee Holloway's body, but he would neither identify the location nor say what happened to her the night of her disappearance, a Peruvian police official told CNN Thursday in Lima.

"He says he knew the location of the American citizen but that he was going to explain everything to Aruban police," said Miguel Canlla, head of the homicide division of the Peruvian national police investigative unit.

Van der Sloot, twice detained but never charged in the disappearance of Holloway five years ago in Aruba, was arrested last week in connection with a different case: the slaying of a 21-year-old Peruvian woman in Lima, the nation's capital. He confessed to the Peruvian woman's slaying earlier this week, police said.

Van der Sloot was transferred from a police facility to the national attorney general's office Thursday morning, according to images broadcast by CNN affiliate America TV.

His attorney, Maximo Alonso Altez Navarro, told CNN his client will go from the attorney general's office to the Justice Ministry, where a judge will determine which jail he will go to.

The lawyer said he has spoken with the director of jails in Lima to make sure van der Sloot is safe once he is moved to one of the city's maximum-security prisons.

Altez said he planned to ask the judge in the case to strike down van der Sloot's confession in the Peruvian case, because he was not properly represented when he was interrogated.

The attorney said police got a public defense attorney to be present at the interrogation and subsequent confession, but that van der Sloot never agreed to this lawyer.

Altez also said he has found indications that the handling of the evidence was tainted, especially the way the body was handled during the crime scene investigation.

He intends to go to trial, Altez said.

Altez said Flores attacked van der Sloot first, after he confronted her for going through his computer. Police said Flores was badly beaten and suffered a broken neck.

Van der Sloot confessed Monday night after a seven-hour interrogation to killing Flores, a source with direct knowledge of the investigation told CNN.

Upon van der Sloot's return, he found Flores going through his laptop, where she found something linking him to Holloway's disappearance, the source said.

Van der Sloot told investigators he had smoked marijuana before the confrontation, the source said.

Van der Sloot, 22, was arrested in Chile on June 4 and returned to Peru the next day.

While he was never charged in connection with Holloway's disappearance in 2005, he has been charged in Alabama with extortion and wire fraud charges. According to a document from Interpol, van der Sloot contacted a representative of Holloway's mother, Beth Holloway, on or around March 29 to ask for $250,000 in exchange for information on the whereabouts of Natalee Holloway's remains.

A representative for Holloway's mother who paid the money was an undercover FBI agent, a federal law enforcement official told CNN.

However, the FBI and the U.S. attorney's office in Birmingham, Alabama, said Wednesday that the FBI did not supply the money.

"Some news accounts have suggested that the FBI provided $25,000 in funds that were transmitted to van der Sloot. This is incorrect. The funds involved were private funds," the FBI and U.S. attorney's office said in a statement.

Interpol documents show that the $15,000 was transferred to a personal bank account in the Netherlands. The information about Natalee Holloway that van der Sloot provided to the FBI was not true, according to the documents.

Although the investigation involving alleged extortion had been in motion for several weeks at the time of Flores' death, "it was not sufficiently developed to bring charges prior to the time van der Sloot left Aruba," the FBI statement said.

"This is not due to any fault on the part of the FBI or the U.S. attorney's office, where agents and prosecutors were working as hard as possible to bring the case to fruition when they learned of the murder. A case based on events outside of the United States is a complex matter, and work was proceeding with all deliberate speed to prepare the evidence, the charges and the necessary procedures to obtain custody of van der Sloot," the statement said.

CNN's Mayra Cuevas and Rafael Romo contributed to this report.