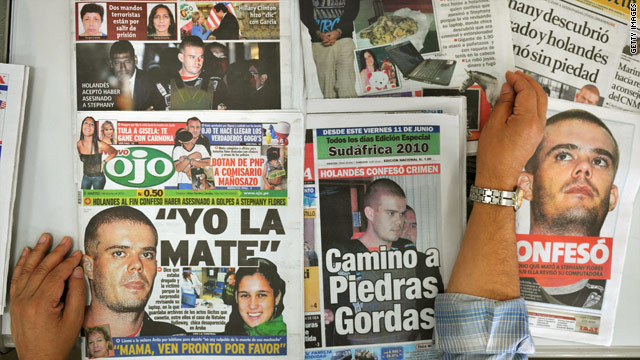 Lima, Peru (CNN) -- A re-enactment of the crime in which a Peruvian woman was killed may not take place because authorities could decide they already have enough evidence, Peruvian officials said Wednesday.

Joran Van der Sloot, the longtime suspect in the disappearance of Alabama teen Natalee Holloway, could be formally charged soon, authorities said. A news conference was scheduled for Thursday.

Van der Sloot -- who authorities have said confessed to the Lima crime Monday night -- had been expected to re-enact for investigators the crime in his room at Hotel Tac. The re-enactment already had been delayed once for security reasons.

Peruvian authorities also confirmed that van der Sloot now has a private attorney and met with him Tuesday night.

The Peruvian justice system often issues a lighter sentence in cases in which the suspect confesses. Van der Sloot, a 22-year-old Dutch citizen, could get up to 35 years in prison. There is no death penalty or life sentence in Peru.

A source with direct knowledge of the investigation told CNN that van der Sloot told investigators he left the room to buy bread and coffee at a gas station next to the hotel. Upon his return, he found Flores going through his laptop, where she found something linking him to the disappearance of Holloway, the source said.

Van der Sloot was arrested twice in connection with Holloway's disappearance in Aruba but was released for lack of evidence. He has denied any involvement and has not been charged.

After finding the material on the computer, Flores wanted to leave, according to the source. The pair started arguing, Flores slapped van der Sloot, he hit her back, and then he grabbed her neck, the source said.

Video from hotel security cameras shows van der Sloot and Flores entering his room at 5:33 a.m. on May 30. He emerged alone and left the hotel more than three hours later, the video shows.

He was arrested in Chile on Thursday and returned to Peru on Friday. The source said he was interrogated for seven hours Monday.

According to a Peruvian police report leaked Monday, Flores' body was found by a hotel worker. The body was on the floor, dressed in a black T-shirt and red panties, half-covered with a piece of white clothing, the report said. It said Flores had bled from her nose.