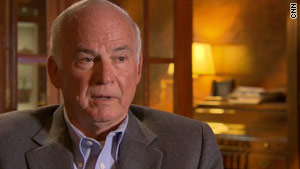 Attorneys began calling Jack Mallard "Blood" because of the way he went for the jugular in the courtroom.

Atlanta, Georgia (CNN) -- Prosecutor Jack Mallard was waiting for the moment Wayne Williams, on trial in the Atlanta child murders case, would take the witness stand in his own defense.

"I knew he figured he could out-talk the prosecutor," Mallard says. "He had tried out-talking everybody else, and I knew I'd be ready."

Under cross-examination, Williams blew up at the prosecutor, saying, "You must be a fool," and then telling Mallard, "You want the real Wayne Williams? You got him right here."

In his closing statement, Mallard would quote that outburst to the jury in describing Williams as "a Jekyll and Hyde" personality. A day later, the jury convicted Williams on two counts of murder. He was eventually sentenced to two life sentences in prison.

"I think I made my point that he had a dual personality," Mallard told reporters when the 1982 trial ended. "I thought I'd stay after him until he showed it. And it took longer than anyone else before."

Video: Night on the bridge

Video: Wayne Williams on trial
I knew he figured he could out-talk the prosecutor. He had tried out-talking everybody else, and I knew I'd be ready.
--Wayne Williams' prosecutor Jack Mallard
RELATED TOPICS

"I was my own worst enemy," says Williams, who still argues he is innocent. "I could almost see the shock in the jurors' faces."

Mallard says, "I have to admit, it was a high point of perhaps my career."

Now in his mid-70s, Mallard was a prosecutor for 40 years, winning a number of Atlanta's highest profile trials: a drug-dealing lawyer who had his wife murdered in front of their own children to silence her; a woman who poisoned two paramours with anti-freeze.

Early in his career, defense attorneys began calling Mallard "Blood" because of the way he went for the jugular in the courtroom.

In retirement, living on a lake north of Atlanta, Mallard has written his own book on the Atlanta child murders, subtitled "The Night Stalker."

While Williams was convicted only of killing two adults whose bodies were found downstream from the river bridge where police spotted him, Mallard believes Williams was responsible for many more deaths during two years of terror in the city.